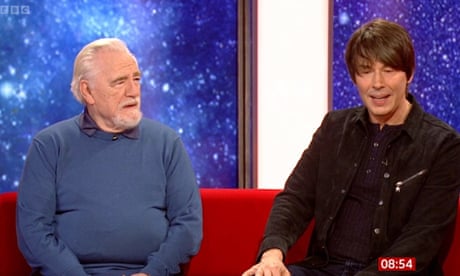 It adds a whole new meaning to double booking. Or perhaps it’s more of a mathematical problem: solve Brian Cox squared? But when the question was raised by a hotel receptionist, it was left to an actor and a physicist to find an answer.

Brian Cox, the former musician turned physics professor, was the first to encounter the problem when attempting to get a key to his room in the hotel in which Brian Cox, the Scottish actor best known for starring in Succession, was also staying before a joint TV appearance.

Speaking to BBC Breakfast on Friday, the two men explained what had happened the previous day when attempting to check in.

“Well, last night was very confusing,” the actor Brian Cox said. “Because Brian arrived at the hotel and [they] said there are two Brian Coxes, so you’ve got two rooms.

“And he said: ‘No, no, there’s only one, but I think there might be another Brian Cox,’ to which the hotel worker replied: ‘We can’t have two Brian Coxes.’”

The physicist Brian Cox, 54, then chimed in, saying: “They wouldn’t check me in!”

The actor added: “They wouldn’t check him in, so he had to use his assistant’s name.”

The physicist said: “I had to change my name. They couldn’t do it on their computer system. They didn’t believe me. And I got a picture up on my phone and said: ‘Look, this is Brian Cox, he’ll be coming later, and then this one …’ and he said: ‘I know neither of you, I don’t watch television.’”

The actor Brian Cox, who first gained recognition for his work with the Royal Shakespeare Company and the Royal National Theatre, has previously revealed he was initially extremely annoyed at the prospect of having to share his name with another celebrity.

In a Guardian interview with both Brian Coxes earlier this year, the actor said: “It annoyed me initially – but has been such a great lesson – to find someone who is extraordinarily successful with the same name as me. It irked me at first, then I thought: it’s not important.

“I mean, we have the same name, but then something comes into play where you go: ‘Well, it’s only a name.’ So it has been wonderful meeting you, Brian, because it’s proved that name doesn’t matter. I’m very pleased that we’ve got the same name, but ultimately it’s just one of those curiously strange accidents.”