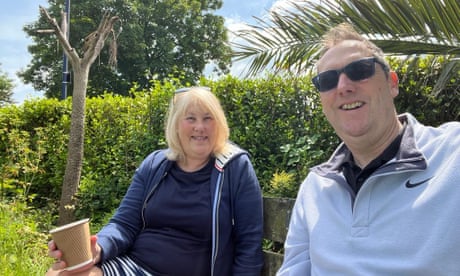 It’s been seven years since Nigel French was woken up in the middle of the night by his wife after having a seizure, which came out of the blue after experiencing a mild headache – something he had simply put down to blocked sinuses.

“She told me that the ambulance had arrived and I was like: ‘what ambulance?’” recalls French, 53, a mechanic who was diagnosed with glioblastoma that required urgent surgery, without which he would have had only months to live.

In a different scenario, the impact of one of the most aggressive forms of brain cancer would have taken its toll by now, but thanks to a revolutionary vaccine, he is not only still alive but continuing to work and enjoy all that life has to offer.

“We used to live in Sidcup [south-east London] but we’ve relocated now to Whistable on the Kent coast, which we’re loving,” he says.

But even more precious moments have been made possible by the DCVax-L vaccine, which French has been taking as part of a trial at King’s College hospital and other centres around the world.

“I got to see a granddaughter born at the beginning of February to my eldest, which was obviously lovely,” says French, the father of three children aged 28 to 36.

Using patients’ immune cells to target brain cancer, the vaccine works by injecting those cells back into the body, with that information shared so that the entire immune system recognises and attacks the target.

The beauty of this is not lost on French, who adds: “It’s about individuals really, isn’t it? This is about tailoring something for an individual person, using your tumour and your white blood cells, which have got to be a positive thing. I know it’s expensive, but it clearly works and we would have tried everything to find the money for it.”

Remarkably, he has felt no side-effects, while further encouragement has come during recent checks.

“Thankfully I’ve had no recurrence or anything and have just had the results last week from a scan last month, which were all good. My scans have been stable,” he added.

Today, he’s no longer on any treatment, though continues to take a drug to head off seizures, which are still a risk as a result of scarring left by his operation.

“I’m just carrying on really, living life normally. I wake up in the morning and there’s beautiful coastal views. We have a dog from Battersea Dogs Home who we got just before 2014 and he gets much better walks here now. It’s just really nice.”