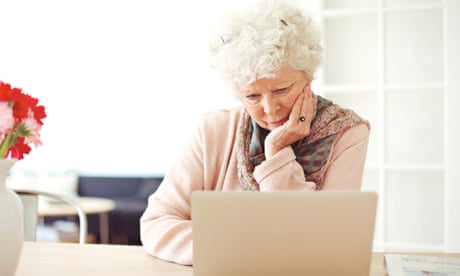 Many people in Britain can’t live without their smartphone and use it to manage all aspects of their lives, from banking to shopping and socialising. But what if the opposite is true, and this clever technology is erecting invisible barriers that leave you unable to do basic things such as pay online, contact your GP or even park.

This is what it feels like for Jean Peters*. The 83-year-old widow, who lives alone in a south Cambridgeshire village, complains that “everything is going online at a faster and faster rate” to the detriment of those “who can’t keep up”.

She is one of millions of older people who are members of the smartphone underclass who are finding it almost impossible to carry out basic day-to-day functions in a world that assumes everyone lives via their handset.

“Year by year it gets harder and harder for the technically challenged to function normally, and we are growing increasingly pissed off about it,” Peters says. “It’s a basic issue of fairness and discrimination. I mean, how did we get to the stage where it has become almost impossible to pay for parking without a mobile phone?”

If by some miracle you get through, they demand some password or other that you almost certainly don’t have

All the data suggests that far from being alone, Peters is articulating a growing sense of frustration across the country. The charity Age UK estimates that 40% of the over-75s don’t use the internet at all and are struggling to access basic services as a result.

Peters, whose uses an iPad daily and an iPhone she is less comfortable with, says companies should be required to offer online alternatives.

“Have you tried contacting an energy or an insurance company in person recently?” she asks. “If by some miracle you get through, they demand some password or other that you almost certainly don’t have, at which point you are forced to give up.”

The widow has also been affected by the retreat of banks from the high street. The two branches nearest to where she lives have recently closed, meaning she has to drive 30 miles to carry out anything more than the most basic banking service in person.

“I have banked with Barclays for more than 60 years but now find I can no longer use the services for which I pay £20 each month because I don’t trust online banking and won’t do it,” she says.

The Digital Poverty Alliance – a group of charities formed to tackle exactly this issue – estimates there are as many as 11 million people in the UK who are struggling to deal with the tech-only options that have become the new normal.

However, while countless studies have shown how older people are increasingly being frozen out, or charged significantly more for the same services, little is being done to aid their plight, it argues.

A combination of the coronavirus pandemic – when it became acceptable for companies to no longer answer their phones or to even open, let alone reply to, letters – and the banks being forced to carry out strong customer authentication (SCA) checks to those banking or even shopping online, is locking people out from a world they used to be able to participate in.

An obvious example among many is the decision last year by the home delivery service Milk & More to move to online accounts only, a move that disfranchised many of the firm’s older shoppers who were among its core customer base.

Add in the fact that smartphones bear no resemblance to the Nokia handsets that many older people had become used to, and it is easy to see why so many people are feeling left behind.

“Lots of the over-75s got used to video-calling their grandchildren during the pandemic. However, when it comes to doing more complicated things online, lots of this group tell us they struggle for a variety of reasons,” says Sally West, the policy manager at Age UK. “Some people struggle to use a keyboard or they might have hearing problems and struggle with a mobile.

“People aren’t just missing out on online shopping, many important services are being pushed online without a thought for those who don’t use or have access to a phone or a computer.”

“For example, local authorities are increasingly pushing important services like housing benefit online,” she adds. “We know that lots of older people who qualify often don’t apply for this benefit. Making it harder for those not online to apply only reduces its take-up among those who need it most. It’s a similar story across the board.”

When Guardian Money asked readers to report on their experiences earlier this year, trouble paying for online shopping in the face of new anti-fraud identification checks was causing the biggest headaches.

Under the SCA rules, online shoppers often have to prove their ID when making a payment. It is complicated in that they are required to input a piece of information they know (a password or something similar) plus a one-time passcode either generated at home using a card reader or sent to the cardholder’s mobile phone or via the bank’s mobile phone app.

Getting this code has not only been a big problem for older shoppers without a mobile; it has also been one for those living in areas with a poor mobile signal – but there are a number of ways you can make it work better.

If you ask, some banks will send you the code as a recorded message to a landline. The downside to this is that it is often spoken too fast. Perhaps the best option – if your bank offers it – is getting the code by email.

The problem is not all the banks offer the landline or email option. Nationwide does but Barclays doesn’t. The latter’s customers who don’t have a mobile (or a signal) have to use the app or its card reader to confirm it is them making the purchase.

It is worth noting that not all shopping transactions require authorisation at checkout, as lots of these checks go on in the background, but enough do to cause problems. “Customers should speak to their bank or provider to discuss the options available,” says UK Finance, which has guidance for vulnerable customers on its website.

The lack of access to one-time-passcodes has been a big problem for people doing online shopping on their older parent’s behalf, usually from their own homes, and in some cases from another country.

The banks will not generally send one-time passcodes to foreign mobiles but the emailed code option will work provided the person doing the shopping can intercept it or have it forwarded. If your card provider won’t send an email, you may be better off switching.

As yet, no consumer group has named the best bank for older customers. However, we think Nationwide is a good option, not least because it is keeping branches open. The Co-operative has been praised by readers in this regard – if you get through to its call staff. Last year this was near impossible, forcing Co-op to hire more staff.

The consumer group Which? says First Direct and Nationwide are the top two banks for disabled customers, which, while not directly relevant, is a good indication of the banks prepared to do more to help.

Another option is to choose a card provider that will let you put your chosen store on an approved list. This means that once you have gone through the verification process when using, say, the Tesco or Sainsbury’s website for the first time, it will not ask you to verify subsequent shops once you have added the site to your trusted beneficiaries list.

American Express allows this through its SafeKey programme. The much-criticised new John Lewis Partnership card also allows you to set up a “trusted retailers” list.

Jenny Ross, the money editor at the consumer group Which?, says millions of people are being left behind by the creep of digital services, a trend not helped by the wave of recent bank closures.

“Our research indicates strong support for in-person banking options across age groups and that older people are less likely to use banking apps,” Ross says. “The number of high street branches has been slashed in recent years, and with more closures to follow, it’s important that consumers who don’t manage their finances on a smartphone are not forgotten.”

There is currently nowhere the digital divide is being felt more keenly than in the nation’s car parks, according to campaigners. As more and more car park owners – many at vital sites including hospitals – have replaced cash machines with signs demanding customers pay via their app, non-smartphone-using older people have seen their worlds shrink.

Parking apps such as PayByPhone and RingGo may be quick and convenient if you know what you are doing but they are a nightmare for the uninitiated who just want to pump coins into the meter and walk away. Indeed, the campaigner Esther Rantzen has called on ministers to stop parking firms that force customers to pay by app only from being allowed to issue fines.

On a practical level there is little drivers can do other than find cash-taking alternatives, or planning ahead and asking a friend or relative to pay the charge on their behalf. Or, if you can, use a car park with a number plate recognition system, which can be easier.

Private parking sites may have the right to app-only charging in their terms and conditions but would this stand up to an Equality Act challenge from someone who is physically unable to use a smartphone? Probably not.

* Jean Peters is not her real name.