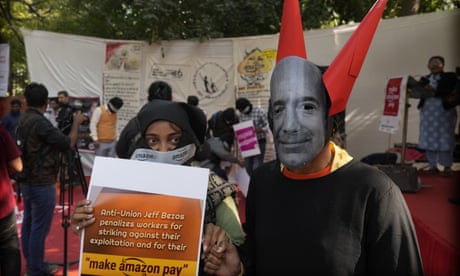 Amazon warehouse workers in the UK and 40 other countries are to strike and stage protests timed to coincide with the Black Friday sales, one of the company’s biggest shopping days of the year.

Employees in dozens of countries, from Japan and Australia to India, the US and across Europe, are taking part in strikes and protests demanding better wages and conditions in a campaign dubbed “Make Amazon Pay”.

In the UK, hundreds of members of the GMB union are staging strikes or protests at a number of Amazon warehouses, including a protest outside its fulfilment centre in Coventry.

“We are here today to tell Amazon [that] if you want to keep your empire going, talk to GMB to improve the pay and conditions of workers,” said Amanda Gearing, a senior organiser at the GMB. “Amazon workers are overworked, underpaid and they have had enough.”

Profits at Amazon Services UK, the group’s warehouse and logistics operation, which is thought to employ more than half of the company’s UK workforce of close to 75,000 people, have soared by 60% to £204m and revenues grew by just over a quarter to more than £6bn last year.

Workers are demanding a wage increase from £10.50 to £15 an hour as the cost of living crisis hits household budgets.

However, participating in the action in the UK could mean that protesters miss out on the second part of a £500 bonus Amazon agreed to give to tens of thousands of frontline workers.

Last month, Amazon UK said that the award of the second part of the payment was dependent on staff taking no “unauthorised absence” between 22 November and Christmas Eve.

The GMB argued that linking the payment to staff attendance could be viewed as an illegal strike-busting move.

In London, security guards and CCTV operators at Harrods are also going on strike on Black Friday, including staging a protest outside the luxury Knightsbridge store, the first of 12 days of action through the festive period.

More than 50 staff members are taking part in the protests, which are to be staged across every weekend in December and include Christmas Eve and Boxing Day, over a 7% pay offer they view as a “cut” with inflation running at more than 11%.

Last month, Harrods, which is owned by the Qatari Investment Authority, reported an annual profit of £51m, more than doubled the pay of its managing director to £2.3m and revealed it had collected almost £6m in government support under the Covid furlough scheme.

“Harrods and its owners can absolutely afford to pay these workers a rise that reflects soaring living costs,” said Sharon Graham, the general secretary of the union Unite.

Meanwhile, the industry body UKHospitality said a series of planned rail strikes in the run-up to Christmas would cost UK restaurants, pubs, clubs and bars £1.5bn, and called on the government to bring all partners to the table to try to reach a solution.

Mick Lynch, the head of the Rail, Maritime and Transport union (RMT), said strikes will go ahead, after a first meeting with transport secretary Mark Harper to try to resolve the dispute on Thursday.

Kate Nicholls, the chief executive of UKHospitality, said the disruption and financial cost of the strikes will cause another lost Christmas on the scale of the impact of the Omicron variant of Covid last year.

“This disruption will devastate hospitality businesses during its busiest period of the year and will once again force the public to cancel and rearrange plans,” she said. “The impact of rail strikes already this year has been devastating and wide-reaching but this will pale in comparison to what we will see as a result of the upcoming strikes in December.”