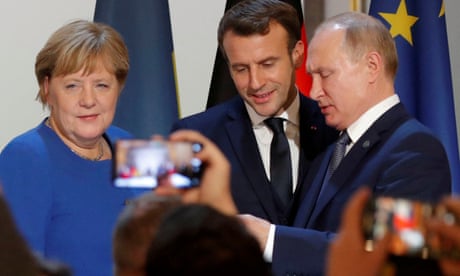 Angela Merkel has insisted that her position as a lame duck in the last months of her time in office made it more or less impossible for her to influence the behaviour of Vladimir Putin.

The former German chancellor appeared both defensive and quietly defiant about her inability to change the course of the Russian president’s decision-making in the run-up to the invasion of Ukraine in February.

In an interview with the German news magazine Spiegel, Merkel said she felt acutely aware that her ability to negotiate with Putin was minimal, owing to the fact it was known she would not stand for a fifth term in office.

“I no longer had the power to push my ideas through because everyone knew ‘she’ll be gone by autumn’,” she said, describing how she had tried to establish a round of European talks after a meeting in the summer of 2021 between the US president, Joe Biden, and Putin. “Had I been standing again in the September I’d have kept drilling down, but … at my final meeting in Moscow [with Putin and his foreign minister, Sergei Lavrov], the feeling was clear: from a political power point of view, you’re finished. For Putin it is only power that counts.”

In her interviews with Alexander Osang, which took place over a period of a year and in various locations, Merkel insisted that her stance on the Minsk agreement – which brought a ceasefire after Russia’s 2014 annexation of Ukraine’s Crimea peninsula – had been right. Key points of the Minsk peace talks, including disarmament and supervision by an international body, were never followed through. But Merkel said the agreement had nevertheless helped buy Kyiv time to arm itself better against the Russian military.

According to Osang, she repeatedly implied that she felt misunderstood over what she had tried to achieve as German leader, facing as she now does a barrage of accusations over some of her choices, such as her decision to block Ukraine’s admission to Nato in Bucharest in 2008, seen by many as having harmed its ability to defend itself. Her refusal to acknowledge her mistakes in allowing Germany to become ever more dependent on Russian gas supplies is another major criticism.

Merkel also appeared to be loosely comparing her behaviour to that of Neville Chamberlain, the British prime minister associated with the flawed policy of appeasement towards Adolf Hitler by allowing him to expand the territory of Nazi Germany in the 1930s.

Having watched the Netflix drama Munich – the Edge of War, based on the Robert Harris novel, in which the actor Jeremy Irons plays Chamberlain, Merkel said she had been intrigued to see him portrayed in another, more positive light – “not as a fearful stirrup-holder for Hitler but as a strategist who used his country to create a buffer so that it could better prepare for German attack”.

Merkel added it was unfair to suggest she had not paid Ukraine enough attention in 2013 and 2014. “People write about 2013 and 14 as if I had had nothing else to concern myself with than the Minsk agreement, and ask: ‘How could you have taken your eye off Ukraine?’ But this is too simple. We had elections [in Germany], there was always something going on with Greece at the time, and I broke my pelvic bone,” she said, referring to an injury incurred while on a cross-country skiing holiday in 2014.

Among the anecdotes she relays in a wide-ranging interview in which she is reflective and sometimes gloomy about her time in office, are encounters with the Queen – though Merkel said she was never able to establish what the British monarch thought about Brexit – and a G7 meeting with Boris Johnson, who she said had been attempting to undermine the Northern Ireland protocol. On warning him, apparently half in jest, that he was on his way to becoming a sinister Shakespearean figure, Johnson went out of the room, returning five minutes later to tell her: “If that is the case, then I want to be Hamlet.”

She said she was currently in a “period of pupation”, trying to reinvent herself. “I’ve entered a period of reflection, and the hamster wheel phenomenon is getting less.”

She said the activities she had found time for since leaving her post included watching the series The Crown, and Babylon Berlin. She had also watched the Queen’s funeral on television, and taken an interest in many of the guests she had recognised, including Tony Blair, whom Osang said she referred to as a “great political talent who had lost his reputation” over the Iraq war. She refers to reading Schiller and Shakespeare as well as Sebastian Haffner’s biography of Winston Churchill and said she was now reading Churchill’s mammoth war diaries, together with Beate Baumann, her longtime office manager. She and Baumann are also writing a book together about her chancellorship for which they have reportedly received a large advance.

One of her first out-of-post holidays had been a tour of Tuscany last spring with an art historian friend, she said.