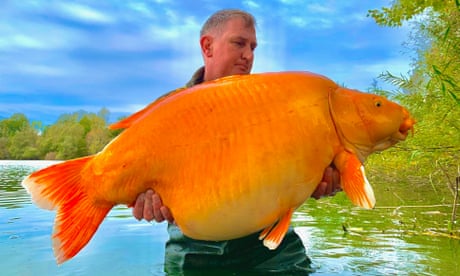 Goldfish are normally big enough to live in a bowl in people’s homes, happily whiling the hours away, scarcely taking up enough room to cause any trouble.

However, angler Andy Hackett managed to catch a much bigger version of the fairground prize favourite when he landed one of the world’s largest weighing more than 30kg (67 pounds, or five stone).

The elusive fish, known as the Carrot after its orange colour, was landed at Bluewater Lakes in Champagne, France. It was put into the lake 20 years ago, and has proved to be a slippery customer ever since.

Hackett, from Kidderminster in Worcestershire, spent 25 minutes bringing the fish in, the Daily Mail reported.

It is a hybrid species of a leather carp and koi, and is thought to be the second largest of its type ever caught.

The 42-year-old said: “I always knew the Carrot was in there but never thought I would catch it.

“I knew it was a big fish when it took my bait and went offside to side and up and down with it. Then it came to the surface 30 or 40 yards out and I saw that it was orange.

“It was brilliant to catch it but it was also sheer luck.”

He posed for a photos afterwards before releasing it back into the water.

The fishery manager, Jason Cowler, said: “We put the Carrot in about 20 years ago as something different for the customers to fish for. Since then it has grown and grown but it doesn’t often come out. She is very elusive.”