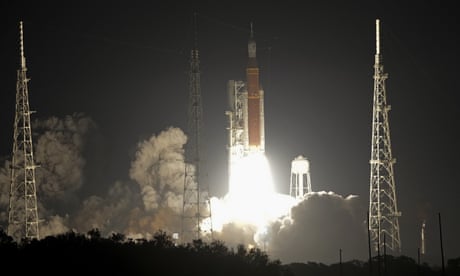 Astronauts are on course to be living and working on the moon before the end of the decade, according to a leading Nasa official.

Howard Hu, head of the US agency’s Orion lunar spacecraft programme, said humans could be active on the moon for “durations” before 2030, with habitats to live in and rovers to support their work.

Hu was put in charge of Nasa’s spacecraft for deep-space exploration in February and was speaking as the 98-metre-tall (322ft) Artemis rocket powered towards the moon on its first uncrewed mission.

The giant rocket, which is topped with the Orion spacecraft, launched on Wednesday from Cape Canaveral in Florida after a series of delays due to technical glitches and hurricanes. Although no crew are onboard, the spacecraft carries three fully suited mannequins, which will register the stresses and strains of the Artemis 1 mission. The rocket is now about 83,000 miles (134,000km) from the moon.

“We are going back to the moon. We’re working towards a sustainable programme and this is the vehicle that will carry the people that will land us back on the moon again,” he added.

The spacecraft will fly within 60 miles of the moon and continue for a further 40,000 miles before swinging back around and aiming for a splashdown in the Pacific Ocean on 11 December. The spacecraft will travel 1.3m miles on the 25-day mission, the farthest a spacecraft built for humans has ever flown.

On re-entering Earth’s atmosphere, the spacecraft will be travelling at about 25,000mph, sending the temperature of its heat shield up to approximately 2,800C (5,000F). It is expected to splash down off the coast of San Diego.

A successful mission will pave the way for follow-up Artemis 2 and 3 flights, both of which would send humans around the moon and back. The Artemis 3 mission, which may not launch until 2026, is expected to return humans to the surface of the moon for the first time since Apollo 17 in December 1972. Under Nasa’s plans, that mission would land the first woman on the moon, with a subsequent visit landing the first person of colour on the lunar surface.

The Artemis programme, named after the twin sister of Apollo, also plans construction of the Lunar Gateway, a space station where astronauts will live and work as they orbit the moon. “Moving forward is really to Mars,” Hu told the BBC. “That is a bigger stepping stone, a two-year journey, so it’s going to be really important to learn beyond our Earth orbit.”