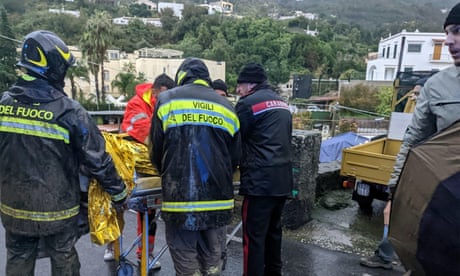 At least eight people are dead and several are missing, including a newborn child, after a severe storm triggered a landslide on the Italian island of Ischia.

The island, in the Gulf of Naples, was engulfed by heavy rain overnight, with the landslide hitting the hamlet of Casamicciola Terme early on Saturday morning, flooding homes and sweeping away several cars.

Before the deaths were confirmed by the deputy prime minister, Matteo Salvini, 13 people were reported missing.

Among those missing is a family with two children and a couple with a newborn child, according to Italian news reports. A 60-year-old man has been hospitalised with serious injuries.

Electricity has been cut off in the affected area while about 30 families have been stranded in their homes in the hamlet of Lacco Ameno, where several buildings are reported to have collapsed.

Gino Ballirano, a parish priest at Santa Maria Maddalena church in Casamicciola Terme, told the Ansa news agency: “I’m calling people who may be missing, but unfortunately I have not yet received an answer. I’m trying to get there but the road beneath my house is blocked by a wall of cars and trees.”

The mayor of Ischia, Enzo Ferrandino, has urged residents to stay at home.

Known for its natural hot springs, Ischia has a population of about 20,000 and is popular with Italian and foreign tourists. Ferries to and from the island have been suspended.

“It’s a tragedy, the number of missing people in Casamicciola is still uncertain,” said Ferrandino. “Due to bad weather on the island of Ischia we also have situations in other areas, such as flooding, but fortunately not particularly serious.”

In 2017, Casamicciola was struck by an earthquake in which 42 people were injured. A landslide in the hamlet in 2009 killed a 14-year-old girl.

Much of Italy has been hit by heavy rain over the past week. In September, 13 people were killed by severe flooding in the central Marche region.