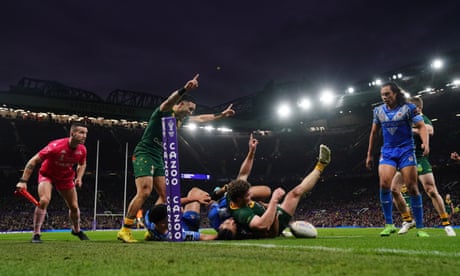 Australia’s grip of dominance on international rugby league shows no sign of ending any time soon, after the Kangaroos dashed Samoa’s hopes of a first World Cup to retain the trophy yet again.

Mal Meninga’s side have now won 11 of the last 12 World Cups, with the only blot on their card defeat in the 2008 final to New Zealand. Here, they were faced with fresh opposition in the Samoans, the Pacific island of just over 200,000 people who have created history with their run to their first final.

But the outcome was a familiar one with Australia having too much skill and class to ensure they won rugby league’s biggest honour once again. Samoa showed plenty of effort and spirit throughout and can look back on this tournament as a breakthrough one, but they were ultimately no match for the might of the Kangaroos, who remain the world’s best side by a distance.

Matt Parish’s side were arguably on top in the early exchanges, roared on by a crowd of 67,502 who were keen to see Australia come unstuck. But when they didn’t convert any of their early territory into points, you feared the worst, and Latrell Mitchell made them pay when he broke the deadlock on 13 minutes with a smart finish.

Five minutes later, a break from Josh Addo-Carr was finished by Australia’s captain, James Tedesco, and when Liam Martin forced his way across to make it 14-0 before half-time, the Kangaroos felt in complete control of the final despite Samoa’s best efforts. They were perhaps fortunate that Angus Crichton wasn’t sent off for an elbow on Chanel Harris-Tavita which ended the Samoan hooker’s night, though.

Crichton was sin-binned, with Harris-Tavita being knocked out and ruled out for the remainder of the game. But even a man light, Australia had too much for their opponents and they moved 20-0 ahead when Cameron Murray scored their fourth.

With the contest all-but over, the crowd were at least baying for one consolation Samoan try. They actually got two, with Brian To’o’s effort raising huge a cheer from those in attendance at Old Trafford. That briefly made it 20-6 before Tedesco scythed through for his second and while Stephen Crichton’s intercept added further respectability to the score for Samoa, the Kangaroos rounded off the scoring with Mitchell’s second in the final minute.