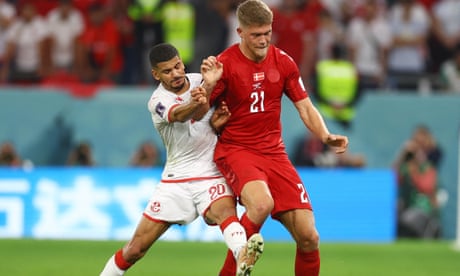 It took 53 seconds on Tuesday for Denmark to fully understand what it means to play Tunisia in Qatar. Fifty-three seconds for their most emblematic player to be stripped of the ball, and for the crowd to revel in a fashion usually reserved for goal celebrations.

Aïssa Laïdouni, who had just slid straight through Christian Eriksen, raised his arms in victory and thrice thumped his chest so hard it looked like it hurt. The midfielder had won the ball cleanly but he had also been bellicose about it, playing up to 25,000 receptive spectators, doing the gladiator thing.

“It was very emotional, you could feel it in them,” Eriksen said after his Euro 2020 semi-finalists were held to a 0-0 draw. “It’s not every day that you celebrate a tackle. This is perhaps something the British did many, many years ago. But they used everything they could today. Respect that.”

The Australia team watched the match on TV at their training base before their opening loss to France, educating themselves on what was to come. Now they know they will not just face 11 players but also Tunisia’s 30,000-odd expat community in Qatar – that number has grown to about 50,000 since the World Cup started.

The nation, home to some of the oldest and biggest ultras fan groups in Africa, has arguably the most visible set of supporters of any side in Doha. Last week a sea of red mobbed the team bus as it arrived and Tunisia shirts are among the most in evidence on the streets. They are not limited to Tunisians; people from Egypt and Algeria are also on board, as are others who fly Palestinian flags.

What the Carthage Eagles achieve is not without meaning for their people back home. The economic and political situation in the country is again deteriorating, little more than a decade on from the Arab Spring. A cost-of-living crisis, shortages of basic goods and soaring unemployment accompany fears of democratic backsliding since the president, Kais Saied, suspended parliament and took on sweeping powers.

For 90 minutes on Tuesday, a divided nation was united. “I hope we can contribute to unifying the Tunisians,” says their coach, Jalel Kadri. “We have seen the joy on the Tunisian streets. We can see how proud they are to belong to a country that is small in other’s eyes but big in our eyes. I cannot express what I felt when they welcomed us.

“We carry a big responsibility now. We feel this is our obligation to make them proud. We want to be the ambassadors of our people.”

What that will look like inside the Al Janoub Stadium – if it is anything like the Denmark game – is chants and cheers and hisses. A cacophony of amped-up emotion, hooked into the veins of the players performing for them. Motivated by them. It is the closest thing at this tournament to a home game save for the host country, Qatar.

“We’ve got to be ready for that war,” says the Socceroos’ coach, Graham Arnold. “Fight fire with fire, especially from the start. And then, when we’re up, put the fire out. They are aggressive and they’re going to have 40,000 fans behind them. It’s going to be a truly amazing experience for everyone.”

This fixture promises to be a fight like few others. Tunisia are seeking to advance from the group stage for the first time in their sixth attempt while Australia, also playing at their sixth World Cup, are vying for a second last-16 appearance and first since 2006.

“There’s a bit more pressure because Australia have nothing to lose now – it’s like a final for them,” says the Tunisia defender Mohamed Dräger. “We need to be ready. With the same spirit, and the same concentration [as Tuesday], we can achieve something.”

On the field they play in a block, do not press high up the pitch and engineer most attacks on the counter. It shapes up as a starkly different challenge to that of France, and one with which the Socceroos have recently struggled.

Arnold has promised to be “in their faces, up high, chasing and pressing”, and will have clued up his players on Laïdouni, who was player of the match against Denmark, and fellow midfielders Ellyes Skhiri and 19-year-old Hannibal Mejbri, along with attacker and captain Youssef Msakni.

“This will be one of the rare games in football where it’s more about heart and fight, rather than technical ability,” says the Socceroos defender Milos Degenek. “It’s more about the desire to win.

“I haven’t seen a team at a World Cup yet with this much heart and passion, desire and love for their country. I think they’re phenomenal. The guys love each other and they have this fire in their eyes.”

The Australian fan contingent is likely to be closer to a couple of thousand, but the players have seen videos of Melbourne’s Federation Square erupting when Craig Goodwin scored against France, and know many more are watching from afar.

“Our supporters [at Al Janoub Stadium] the other night were great,” says the full-back Aziz Behich. “They were loud and you could hear them throughout the game, despite the result.

“[Opposition fans] kind of put fire in my belly, to be honest. We’ve been to places where a lot of teams would have struggled. We went to Honduras [for a 2018 World Cup qualifying playoff] in front of a full stadium, and I’ve played in front of a hostile [club] environment in Turkey. That’s what football’s all about.”