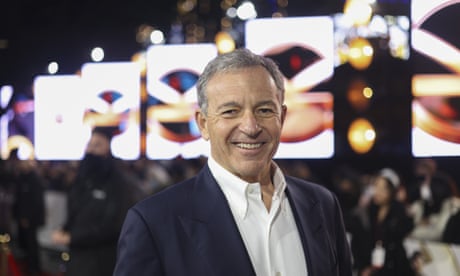 Bob Iger is Disney’s Mr Fixit. From the visionary purchases of Marvel and Star Wars to the takeover of Rupert Murdoch’s Fox that helped arm Disney for a global streaming showdown with Netflix, Iger has proved to be the executive with the Midas touch.

In a plotline that would not be out of place in one of its Hollywood films, the 71-year-old Iger, who only officially retired as executive chairman at the end of last year, has stunningly been recalled to steady the ship at the world’s biggest entertainment company one last time.

Disney’s share price has plummeted more than 40% over the past year, wiping almost $120bn (£101bn) off its market value, as an operational and investor obsession with a streaming subscriber land grab gives way to a focus on good old-fashioned revenues and profits.

The company’s annual results earlier this month proved to be the last straw for Bob Chapek, Iger’s handpicked successor with whom relations became rocky within months of his ascension to chief executive in February 2020.

Disney reported a rare miss on both revenues and profits in the quarter ending 1 October: streaming losses almost doubled year on year to $1.5bn, and Chapek admitted that the company was finally facing the subscriber slowdown that has hammered Netflix, expecting only a “slight increase” to its 235 million global total when it next reports.

Less than two weeks later, Disney stunned markets by announcing the return of Iger with a two-year remit from the board to “set the strategic direction for renewed growth” – and help find a suitable successor.

Investors warmly welcomed the news of Iger’s return with Disney’s shares up more than 8% – nearly $14bn – when Wall Street opened on Monday.

Chapek, a three-decade Disney man with a background at Heinz and the ad agency JWT, was never overly comfortable with the machinations of the glitzier side of the Disney business.

Iger, however, was always comfortable with the creative side of the business. During the 1988 Calgary Winter Olympics, poor weather and disruptions meant his team in the TV division got noticed for human interest stories on Eddie the Eagle and the Jamaican bobsled team, and he later commissioned shows including Twin Peaks.

The Iger era at the top of Disney began in 2005 when he took over the role of chief executive from Michael Eisner, who stepped down a year earlier than planned.

Recognising that owning crown jewel global content franchises was the key to the future, Iger embarked on a buying spree that was almost uniformly criticised and ridiculed by the markets at the time.

In 2006, a year before Netflix made the pivot from DVDs by post to streaming, a move that would ultimately revolutionise traditional TV viewing, Iger spent $7.4bn buying Apple founder Steve Jobs’s Pixar, the animation hit factory behind Toy Story, Finding Nemo and The Incredibles.

This was followed in 2009 by the surprise $4bn purchase of Marvel Comics’ superhero universe, bringing in a multitude of characters including Iron Man and Captain America, taking Disney into new live-action territory.

The third transformational buyout came when Disney snapped up George Lucas’s Lucasfilm, the production company behind the Star Wars and Indiana Jones franchises, for $4bn in 2012.

In 2008, shortly before the launch of its first Marvel film – Iron Man starring Robert Downey Jr – Disney was valued at $26bn. Since then it has peaked at almost $300bn, although is currently worth about $167bn.

“When Marvel was purchased I thought Disney was crazy,” says Michael Pachter, a US-based analyst at Wedbush who has followed the company for decades. “And when Marvel announced its first film was to be Iron Man I defied anyone reading a note I wrote on the company to even be able to describe his outfit. The point was no one knew who Iron Man was, let alone Thor and the others, it sounded crazy.”

Disney, the owner of the most successful Hollywood film and TV studio in history, has built Marvel and Star Wars into the world’s two most valuable franchises, and they have grossed $28bn and $11bn respectively to date.

With Iger at the helm, the company went on to launch Disney+ in the US in November 2019, and rolled out its streaming service in Europe the following spring. Pandemic lockdowns helped the service race to more than 100 million subscribers in 16 months – a feat it took Netflix a decade to achieve.

The drive to profitability has already led to Disney announcing significant price rises of up to 38% to its monthly streaming packages in the US – with Europe and other markets expected to be next.

Iger is stepping into Chapek’s shoes only weeks before the all-important launch of an ad-supported monthly subscription package in the US on 8 December – which analysts believe could bring in up to $800m in ad revenues alone next year – following a similar move by its rival Netflix.

Iger is likely to find that the streaming dream he spent 15 years building in his first stint as chief executive could now be the harbinger of a tenure marked by job losses and cost cutting the second time round.

“The reappointment of Iger underlines the state of the streaming landscape and challenges faced by all traditional media companies pivoting towards this new world,” said Paolo Pescatore, a media analyst at PP Foresight. “The bold move might feel like the right one. However, the business is at a different phase of growth. Measures will likely mean a focus on restricting operations and efficiencies such as job cuts. It will take time and immediate success is not guaranteed.”