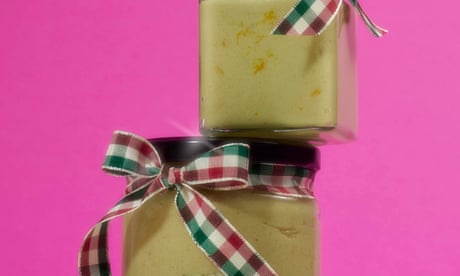 Christmas could be Christmas without brandy butter, chocolate logs and bottles of infused booze, but doesn’t it just feel a bit more like Christmas with them? Either way, making your own, to give as presents, is a surefire way to get into the festive spirit. The spices, the chocolate, the citrus, the booze …

This boozy butter is perfect for slathering on toasted panettone, mince pies and Christmas puds. The arak brings with it a hot anise flavour that makes the butter even more delicious, but don’t worry if you can’t get hold of any: just add more brandy instead. Once made, the butter will keep in the fridge for up to two weeks.

room-temperature unsalted butter
icing sugar
soft brown sugar
good marzipan (at least 60% almonds) – I like Odense
orange, zest finely grated, to get 1 (save the rest of the fruit for another use)
flaked sea salt
brandy
arak, or extra brandy

Put the butter, both sugars, marzipan, orange zest and salt in a food processor, then blitz for two to three minutes, scraping down the sides of the bowl once or twice as you go, until smooth. With the motor running, slowly trickle in the brandy and arak, if using, and blitz for another minute, until well blended and slightly fluffy; don’t be tempted to overmix or the mixture will split. Spoon into a sterilised jar, tie with a pretty ribbon and keep chilled for up to two weeks.

The tart barberries and sweet hawaij spice make this super-chocolatey treat extra-special. Stir a tablespoon of booze into the egg mixture, if you like, to make this an even more festive and grown-up treat.

Put the barberries in a small saucepan with the orange juice, the extra quarter-teaspoon of sugar and a pinch of salt, put on a medium heat and simmer gently for a minute or two. Mix well, then set aside so the barberries soak up the juice and plump up.

Quarter-fill a medium saucepan with water and bring to a simmer. Put both chocolates in a medium bowl and add a quarter-teaspoon of salt. Turn down the heat under the simmering water, then put the chocolate bowl on top of the saucepan, making sure that the base of the bowl isn’t touching the water. Stir until the chocolate has melted, then take the bowl off the heat and stir in the orange zest, almonds, ginger nuts and mixed peel, until they are all well coated.

Put the whole egg and egg yolk in a medium bowl with the remaining sugar, all the spices and a pinch of salt. Put this over the pan of still simmering water and whisk for two or three minutes, until the sugar is melted and the mixture is fluffy and doubled in size. Take off the heat, stir in the soaked barberries and the chocolate mixture, and leave to cool for five minutes – don’t leave it any longer, or it might set.

Once the sausage is fully set, peel off the paper and put the log back on the tray. Sieve the icing sugar into a small bowl, mix in the sumac, then sprinkle all over the log, shaking the tray to roll it in the sugar mixture until it’s completely covered.

Wrap up in clean greaseproof paper, twist the ends to seal and tie with decorative ribbon. It will keep in the fridge for up to a week.

This is a great present for someone who loves an espresso martini or a white Russian, and can be made weeks ahead. Keep the original tequila bottle, because it’s a handy vessel for your gift; if you like, remove the original label and replace it with one you’re made yourself. I’ve also given instructions on how to make a tequila frappé cocktail, inspired by Mexican flavours and Vietnamese coffee, for which I thank Oren Coleman, our head barman at Rovi.

First infuse the tequila. Put the first four ingredients in a sterilised one-and-a-half-litre jar. Scrape the seeds out of the vanilla pod, if using, and drop both the pod and the seeds into the jar.

In a small frying pan on a high heat, toast the chilli for 20 seconds on each side, until fragrant and pliable, then remove and discard the stem and seeds, and add the flesh to the jar. Screw on the lid, shake well and leave to infuse for two days (don’t give it any longer, or it will turn bitter); shake the jar once or twice a day to diffuse the flavours. The mixture will turn a dark coffee colour.

Pour the infusion through a fine-mesh sieve set over a large bowl and discard all the solids except the vanilla pod. Return the liquid and vanilla to the jar (or decant it into a bottle), seal and store in a cool, dark place, where it will keep for at least two months.

To make the tequila frappé, first make a coffee-salt rim. Put the coffee, cacao, sugar and an eighth of a teaspoon of salt in a mortar or spice grinder, grind finely, then tip into a wide, shallow bowl. Run the lime wedge around the rims of four martini glasses (or small tumblers), then roll the rims in the spiced salt to coat.

Pour infused tequila into a blender, add the condensed milk and ice (about eight cubes), then blitz for 30 seconds, until smooth and frothy. Divide between the four glasses and serve cold.