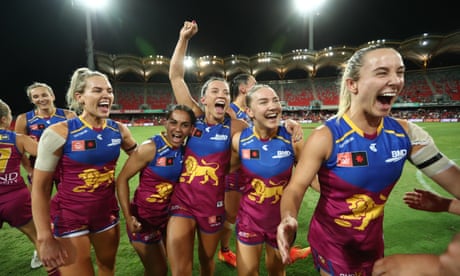 Brisbane have set up the ideal house-warming party after blasting into a fourth AFLW grand final with a 23-point defeat of Adelaide.

The Lions’ win at Gold Coast’s Metricon Stadium on Friday night was built on swarming pressure and a clinical first half.

They will host the decider at their new Springfield base next Sunday – against the winner of Melbourne and North Melbourne – after the newly-laid surface was given the all-clear just hours before the Lions booked their spot.

Jesse Wardlaw (two goals) pinch-hit in the ruck on her way to a record-equalling 22 goals this season while Courtney Hodder’s two-goal second quarter broke the game open.

Coach Craig Starcevich lauded his defensive unit and admitted Bates played with a chip on her shoulder.

“A little bit and she’s had two good finals now, she’s proud and she’s a competitor,” he said.

“I can’t really work out whether this season she has dropped back a notch and the others have caught up.

“But she’s driven by playing against the best players in the comp ... she’s very competitive and doesn’t want to take a backward step.”

The 2021 premiers, who finished on top of the ladder this season by a single point, have also lost two deciders while it is just the second final the three-time champion Crows will miss.

Brisbane dominated the first term with 11 inside 50s to four, but had only Svarc’s steady set shot to show for their dominance.

A four-goal second term broke the game open, Wardlaw and Hodder both kicking two as they took a 29-point lead into the main break.

The Lions were humming when Dakota Davidson threaded a right-footed banana kick through from the pocket to begin the second half.

But Adelaide rallied, Anne Hatchard racking up 25 touches and Caitlin Gould and Danielle Ponter kicking the visitor’s first two goals to make it a 23-point margin late in the third term.

Brisbane steadied though, an even final quarter small consolation for the Crows given the host’s early damage.

“We’re really disappointed, but reality of our season is that we haven’t been as consistent as we were last season.

“Their efficiency inside 50 that (second) quarter; we won the inside 50s 8-6 but they kicked four goals one. That was the game.”