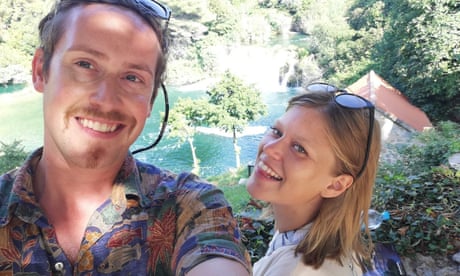 A British man is being deported from Denmark because he did not know he had to apply to stay in the country after Brexit.

Will Hill, 37, was ordered to leave by Sunday. His application to stay, made three weeks late, had been rejected, as was an appeal to the immigration authorities.

He will return to London on Friday, leaving behind his cybersecurity career and his fiancee, Ida Bøgelund Larsen, who said the decision had left her “worried and confused and nervous”. The wedding they planned in January is now in doubt.

He said: “This wouldn’t be happening to me if it wasn’t for Brexit, because I would be treated as an EU citizen.”

Hill’s case came to light two weeks after another British national, Philip Russell, told how he too was facing deportation. Like Hill, he did not know until after the deadline he had to apply to remain in Denmark post-Brexit and was ordered to leave by 6 December on the grounds that his application was four days late.

He called on the British government to “condemn Denmark’s behaviour”. “Denmark is using the incompetence of their own immigration services as an excuse to deport UK citizens,” he said.

Liberal party EU spokesperson Mads Fuglede said the cases were a breach of the withdrawal agreement and called on the Danish immigration department, SIRI, to re-examine the cases of the estimated 290 British people who applied late for their Brexit paperwork.

He told the Politiken newspaper that the communication by SIRI to British nationals about the need to reapply for residency rights for post-Brexit life was “unsatisfactory and not working”.

Hill, who voted remain in the Brexit referendum, said he had no choice but to return to his parents’ home in Surrey. He is now planning to apply for a visa under family reunion rules and hoping he will not miss his wedding, scheduled for the end of January in Denmark.

Under the withdrawal agreement, any EU citizen in the UK or British citizen in an EU member state could remain in the country with residency, employment and social welfare rights. Denmark set a deadline of 31 December 2021 for residency applications, but both Russell and Hill say they received no communication to that effect.

“Beyond me being in a coma and saying I wasn’t aware that I needed to do this, there doesn’t seem to be any way around this,” said Hill.

When his application was initially rejected, he made an appeal complying with requests for evidence of settled life and work in Denmark.

“They asked me to provide so much information about my work, my personal life, my relationship with my partner, everything. They even asked me to provide photographs of me and Ida, and in the end they rejected it because I missed a deadline. They weren’t interested at all in the fact that I have integrated into the country, that I am working full time, I am paying my taxes,” he said.

A spokesperson for SIRI said it could not comment on individual cases. She said the department had made “every effort” to ensure that the application process was as easy as possible and that the government had launched “information campaigns with extensive information on the consequences of Brexit and guidance on how to apply”.

The Foreign Office said the UK government had run a major campaign to inform UK nationals of the impact of Brexit and that more than 18,000 British nationals had applied for post-Brexit residency rights in Denmark.

“The Danish authorities will accept late applications if there are reasonable grounds for missing the deadline,” said a spokesperson for the Foreign Office.