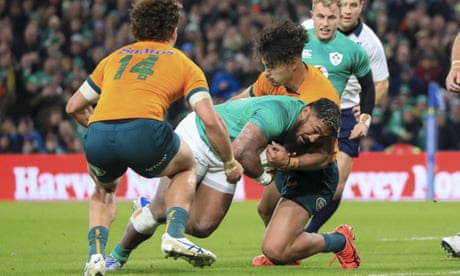 Ross Byrne landed a dramatic late penalty as Ireland overcame the loss of captain Johnny Sexton to cap a stellar year with a disjointed 13-10 win over Australia.

Andy Farrell’s men struggled for large parts of a disappointing contest and could easily have ended 2022 with a serious reality check against opponents beaten by Italy just last weekend.

Ireland centre Bundee Aki marked his return from an eight-game ban with the opening try but the game remained in the balance in the closing stages after Jordan Petaia crossed for the Wallabies.

A difficult evening for the Irish began with talisman Sexton withdrawing through injury, with his deputy Jack Crowley booting five points on his maiden Test start before Byrne, who was elevated to the bench at the 11th hour, proving to be the match-winner.

Victory for Ireland saw them become the first nation to defeat New Zealand, South Africa and the Wallabies in a calendar year since England in 2002.

Sir Clive Woodward’s men went on to lift the World Cup the year after achieving that feat and that remains the ultimate goal for Farrell’s side looking ahead to next year’s showpiece tournament in France.