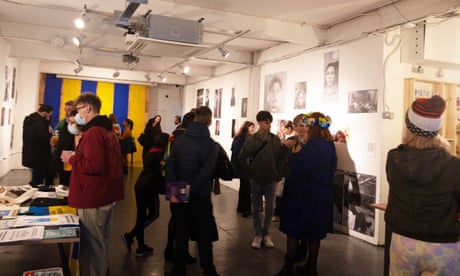 The only publicly funded arts and culture organisation for central and eastern European people in Britain is losing its Arts Council funding, which it said would have a devastating impact on communities, including Ukrainian arrivals.

Centrala, which supports performers and runs galleries, said its removal from the Arts Council’s national portfolio would have a disproportionate impact on communities from central and eastern Europe (CEE).

The cut sent a message that migrants to Britain from these countries were primarily “here to work” rather than being able to also have a cultural life that would enrich their own and other communities, according to Alicja Kaczmarek, Centrala’s director.

“One of the main reasons we started was to counter stereotypes such as the perception that we were here in the UK only to do the jobs nobody else wants to do, or myths and stories in the media such as the one about immigrants eating swans,” she said.

“We decided that we had to show that we have come here with something amazing and important, that we are intelligent and intellectual people, because if we don’t show that to society then what we’re left with are the stereotypes.”

The move comes against a backdrop of a significant shake-up of English arts funding, including a wider overhaul to move millions of pounds from central London.

Centrala’s cut would also have a potentially serious impact on the role it was playing in the UK since the Russian invasion of Ukraine, said Kaczmarek. She said: “Since the start of the war in Ukraine we have been providing support to artists at risk, a place of belonging for Ukrainian communities and a space to showcase Ukrainian art.”

Run by the Polish Expats Association, a non-profit organisation, Centrala operates an arts space in Birmingham consisting of an art gallery, music and events venue, as well as supporting artists and running a programme of events.

The Arts Council decision meant it would have to cancel its entire artistic programme next year and seek alternative support, according to Centrala, which accused the public body of in effect refusing to acknowledge the CEE community as a minority ethnic group.

Centrala also pointed to its advocacy work to ensure that CEE communities and their art were included in UK public life and research, which was often combined with arts commissioning.

An Arts Council spokesperson said it had had to make “difficult decisions” as a result of one of its most competitive rounds of funding. Decisions were driven by the principles of Let’s Create – the Arts council’s strategy for culture and creativity – and an ambition for a fairer distribution of funding across the country, she added.

“We understand that this news is hard for organisations who haven’t received an offer of funding. We value the work Centrala do supporting central and eastern European migrants and communities across Birmingham, and they will continue to receive funding until April 2023.

“In addition, we have a package of support in place. Centrala can apply for transition funding giving them funding for a year to support transition to a new model.

“Not being offered funding does not mark the end of an organisation’s funding relationship with the Arts Council and we would welcome a conversation with Centrala about other funding programmes open to them.”