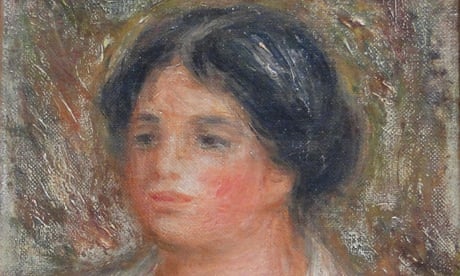 Staring enigmatically at an unseen object to her right, the black-haired woman bears a striking resemblance to the person depicted in Pierre-Auguste Renoir’s painting Gabrielle, which Sotheby’s recently valued at between £100,000-150,000.

However, art connoisseurs disagree over whether the work, which is owned by a private Swiss collector, is the real deal. Now, artificial intelligence has waded in to help settle the dispute, and the computer has deemed that it probably is a genuine Renoir.

AI is increasingly being used to help adjudicate on whether valuable artworks are real or fake. Earlier this month, Art Recognition, the Swiss company that developed the technology, announced it had concluded that Switzerland’s only Titian – a work titled Evening Landscape with Couple, held by Kunsthaus Zürich – was probably not painted by the 16th-century Venetian artist.

Yet art connoisseurs have warned that the AI is only as good as the paintings it is trained on. If they are fake, or contain areas that have been touched up, it could create even more uncertainty.

Art Recognition was approached about the Renoir, titled Portrait de femme (Gabrielle), after The Wildenstein Plattner Institute – one of two institutes that publishes a comprehensive list of all known artworks by Renoir, known as a catalogues raisonnés – refused to include it in its listing.

The company used photographic reproductions of 206 authentic paintings by the French impressionist to teach its algorithm about his style, which to human observers is characterised by broken brushstrokes and bold combinations of complementary colours. To increase precision, it also split the images into smaller patches and showed these to the algorithm, as well as training it on a selection of paintings by artists with a similar style who were active at around the same time as Renoir.

Based on this assessment, it concluded there was an 80.58% chance that Portrait de femme (Gabrielle) was painted by Renoir.

Carina Popovici, Art Recognition’s CEO, believes that this ability to put a number on the degree of uncertainty is important. Speaking at a meeting on the use of forensics and technology in the art trade at the Art Loss Register in London on Monday, she said: “Art owners are often told by connoisseurs that it is their ‘impression’ or ‘intuition’ that a painting is genuine or not, which can be very frustrating. They really appreciate the fact that we are more precise.”

Encouraged by this result, the painting’s owner approached another Parisian group of experts, G-P.F.Dauberville & Archives Bernheim-Jeune, which publishes its own catalogues raisonnés of works by Renoir. After requesting a scientific analysis of the pigments in the painting, they too concluded that it was a genuine Renoir.

Dr Bendor Grosvenor, an art historian and presenter of BBC Four’s Britain’s Lost Masterpieces, worried that such technologies could devalue the contribution of experts in assessing an artwork’s authenticity.

“So far, the methods used to ‘train’ the AI programmes, and the fact that they say they can judge an attribution just from an iPhone photo, are unimpressive,” he said.

“The technology is especially weak in its inability to take into account a painting’s condition – so many old master paintings are damaged and disfigured by layers of dirt and overpaint which, without forensic inspection, makes it hard to discern what is and is not original.

“If any human art appraiser offered to give a ‘certificate of authenticity’ costing thousands of dollars based on nothing more than an iPhone photo and a partial knowledge of an artist’s oeuvre, they’d be laughed at.”

Popovici agreed that the quality of the training dataset was vital, and said they went to great lengths to ensure they only use photographs of authentic artworks. So far, they have trained their AI to recognise about 300 artists, including most of the French impressionist and old master painters.

“We understand that the connoisseurs might feel threatened by this technology, but we are not trying to push them out of the way,” Popovici said.

“We genuinely want to give them the possibility of using this system to help them reach a decision, perhaps in cases where they’re not so sure. But for that to happen, they have to be open to this technology.”

Julian Radcliffe, the chair of the Art Loss Register, which maintains the world’s largest private database of stolen art, antiques and collectables, said: “Artificial intelligence has an increasing role in helping to authenticate art but it must be allied to the expertise of connoisseurs who specialise in the artist, well-established science such as pigment analysis, and provenance research.

“Its advantage lies in its ability to give yes/no answers to, for example pattern analysis or matching, and to constantly improve, but its work has to be interpreted by a human who must have set the right question.

“The quest for absolute certainty in authentication has not been, and may never be reached – but we are edging closer.”