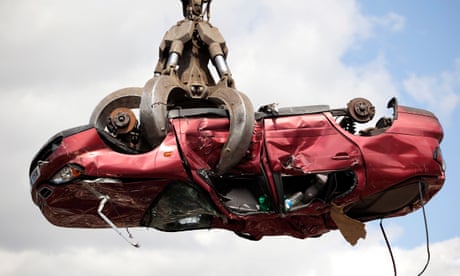 In July 2021 we scrapped our beloved Nissan Micra because it was beyond repair.

I took it to the scrap merchant and my wife posted the V5C form to the Driver and Vehicle Licensing Agency (DVLA). The insurance was cancelled in September.

However, in February a letter from the DVLA said we had failed to insure the Micra. I returned the paperwork, stating we no longer owned the car, with details of the company we used to scrap it, and the date it was scrapped. A letter back thanked us for the information.

We are teachers, so usually go to France for the summer holiday. When we got back at the end of August we found a letter from the DVLA saying we were being taken to court for failing to insure the vehicle, and had 21 days to respond.

I tried to log on to the website to dispute the case but the 21 days had already passed.

I sent all the information again, along with passport stamps that showed we were out of the country when the court letter was sent.

I heard nothing back but have received a £354 fine as the court case went ahead in our absence.

At no point, from sending the information in February, did it give any indication the matter was not resolved.

You thought you had done everything required of you when you scrapped your car. However, when we asked the DVLA to investigate, it insisted “all action taken has been correct”.

It added: “It’s important that motorists tell us straight away when they dispose of their vehicle or risk still being liable for any penalties.”

When you scrap a car there are very specific steps to follow. You must use an authorised treatment facility (usually a scrapyard or breaker’s yard) and they need to fill in the yellow “sell, transfer or part-exchange your vehicle” section of your logbook (V5C).

Then you have to tell the DVLA; the easiest way to do this is via its website. You should receive a confirmation email, followed by a letter stating you are no longer the keeper of the vehicle.

Alternatively, as you say you did, you can post the yellow form to the DVLA and again should receive a letter back. If you don’t get one you need to chase it up.

Based on what you have told me, it sounds like something has gone wrong. I was going to suggest you appeal against this fine but you already have, and have a hearing this month. We wish you luck.