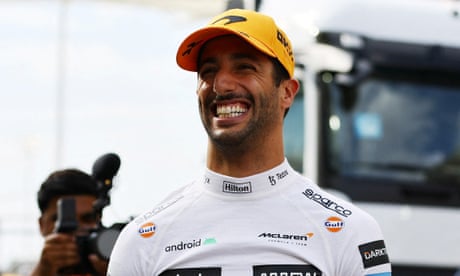 Daniel Ricciardo will join Red Bull as their third driver for the 2023 Formula One season, the Australian reuniting with team he raced for between 2014 and 2018 and with whom he scored seven grand prix victories.

Ricciardo was dropped by McLaren at the end of this season and was unable to secure a full-time race seat with a competitive team for next year. He was eager to maintain a role within F1 and will now join the world champion Max Verstappen and Sergio Pérez at Red Bull. The 33-year-old will take part in testing, simulator work and commercial duties.

He joined Renault in 2019 for two years with limited success after feeling Red Bull was focusing too much on Verstappen but he did take two podiums. A switch to McLaren in 2021 followed but Ricciardo has struggled to match his teammate Lando Norris, despite scoring the team’s first win in nine years at Monza.

Ricciardo said he preferred to take a year away from racing rather than take a seat with a team in the lower reaches of the grid, and that he was enthusiastic about his new role for Red Bull. “I’m truly excited to be coming back home,” he said. “For me, the ability to contribute to and be surrounded by the best team in F1 is hugely appealing, whilst also giving me some time to recharge and refocus.”

The Red Bull principal, Christian Horner, welcomed Ricciardo’s return but has already made it clear he is not being lined up to replace Pérez. “Daniel’s contract is very specific for a specific reason, we have a contract with Checo for the next two years,” he said last week. McLaren are to replace Ricciardo next season with his highly rated fellow Australian Oscar Piastri.

With the season completed last weekend at Abu Dhabi, the FIA has parted company with its interim general secretary Shaila-Ann Rao after six months in the post.

Rao had previously worked for the FIA between 2016 and 2018 before joining Mercedes as special advisor to Toto Wolff. Her appointment had been questioned by other teams, concerned about a conflict of interest.

Rao played a central role in the row over Red Bull’s breach of the 2021 budget cap, informing the team that they had overspent. Red Bull were concerned that they had been unfairly targeted and their punishment had been unnecessarily harsh. The FIA president Mohammed ben Sulayem insisted accusations of bias against Rao were unfounded.