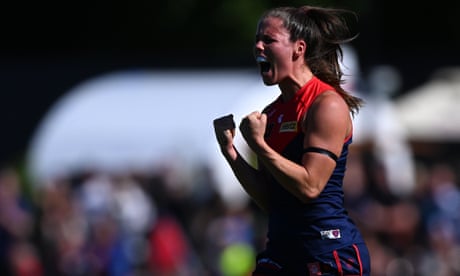 Melbourne are one step away from a breakthrough AFLW flag after hanging on for a gritty 17-point win over North Melbourne.

Lily Mithen and Tyla Hanks starred as the Demons weathered a third-quarter storm in a 5.3 (33) to 2.4 (16) victory in Saturday’s preliminary final at Ikon Park. Mick Stinear’s side will meet Brisbane in the grand final at Brighton Homes Arena on Sunday week.

After losing the decider away to Adelaide last season, the Demons will again travel interstate in pursuit of silverware.

Neither side led by more than two goals until Demons captain Daisy Pearce brought the crowd to its feet with a superb piece of play to kick the sealer in the dying stages.

Star forward Tayla Harris battled on despite hurting her left shoulder during a third-quarter ruck contest and will be a close watch in grand final week.

But the record was of little consolation as the Kangaroos were left ruing a wasteful third quarter. They dominated territory for the term - enjoying an 18-2 advantage in forward entries - and kept Melbourne scoreless.

But they failed to cash in, registering just two behinds of their own to trim the margin to three points at the final change.

Melbourne got the crucial first goal of the last quarter through Kate Hore, who had been quiet to that point.

Demons skipper Daisy Pearce then put the match to bed with a superb snap around her body with less than three minutes on the clock.