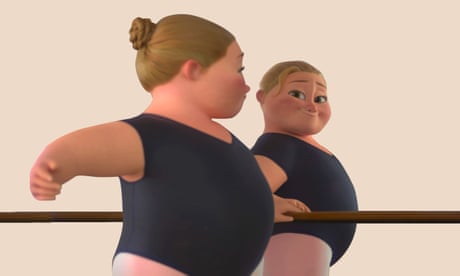 Disney has debuted its first plus-size female protagonist in a short film that is being praised for exploring body positivity and overcoming self-doubt.

The animation, Reflect, tells the story of Bianca, a young ballet dancer who “battles her own reflection, overcoming doubt and fear by channelling her inner strength, grace and power”.

The six-minute feature has been pitched as an uplifting tale of conquering body dysmorphia and self-doubt.

The Disney animation artist and director Hillary Bradfield, who also worked on Encanto and Frozen II, said she hoped viewers could “feel more positively about themselves and how they look” after watching the short.

“Sometimes you go to the dark place to get to the good place. And that just makes the good place that much more beautiful,” she said in an interview before the film’s release.

In a clip released by Disney over social media, Bianca is seen practising ballet in front of a mirror as the reflected image begins to break apart. Struggling with her confidence, she eventually finds her feet and dances until the mirror fades away.

“This is very encouraging and I am glad Disney decided to include a ‘plus-sized’ heroine,” one person tweeted.

“I wish I could have seen this when I was younger! But so happy things are changing!” another said.

Others had reservations. Adam Bray, the author of the Marvel Studios Visual Dictionary, said the film “isn’t long enough to parse nuances of the message”.

In 2020, the company introduced its Stories Matter initiative, pledging to be more inclusive and consultative, and acknowledging Disney’s responsibility to “consciously, purposefully and relentlessly champion the spectrum of voices and perspectives in our world”.