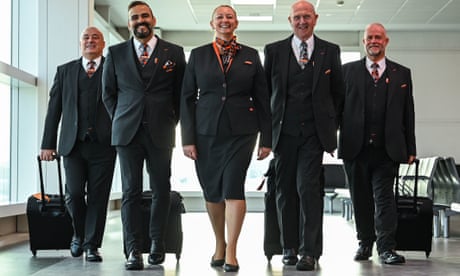 The airline easyJet has launched a recruitment drive urging people over the age of 45 to join its cabin crews, as firms devise new strategies for hiring staff in the UK amid a shortage of workers.

The new campaign is aimed at “empty nesters” – those parents whose children have left home – and workers looking for a new career challenge later in life.

It follows research by the British carrier that revealed more than 78% of UK adults over 45 said they would like a new challenge once their children had left home.

More than half (58%) said they were most excited about starting a new career, the results of a survey of 2,000 people indicated.

During the height of the airports chaos in July, easyJet’s chief executive, Johan Lundgren, was critical of the government’s refusal to allow more visas for EU cabin crew and ground-handling staff, saying ministers had not responded positively to industry requests to relax rules to fill important roles.

In August, Michael O’Leary, the boss of the rival firm Ryanair, said Britain’s exit from the EU had hurt recruitment for the airline industry and “been a disaster for the free movement of labour and one of the real challenges being faced by the UK economy”.

This week, Charlie Cornish, the chief executive of MAG, which owns Manchester, Stansted and East Midlands airports, said there was “no doubt” that Brexit had damaged the UK economy and “massively exacerbated” problems recruiting staff.

UK firms have been struggling to find employees, partly because of labour force changes after Covid-19, such as more people on long-term sickness, but also because of the end of free movement for EU citizens, who lost the automatic right to work in the UK after Brexit.

The easyJet cabin crew drive comes after Halfords launched a recruitment drive for 1,000 new technician roles over the next 12 months by targeting retirees. It also wants to increase the number of women in technician posts.

In August, the chair of John Lewis Partnership, Dame Sharon White, said there was not a business in the UK that wasn’t finding it “very difficult to recruit at the moment” and urged the government to focus on getting the 1 million mostly over-50s who had left the workforce during the Covid-19 pandemic back to work.

Michael Brown, the director of cabin services for easyJet, said: “Our people are at the heart of everything we do, and it’s the warm welcome and fantastic customer service that our cabin crew are famous for.”