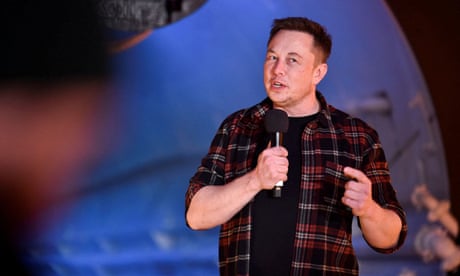 Elon Musk has given Twitter’s remaining staff a Thursday deadline to commit to working “long hours at high intensity” and being “extremely hardcore” or else leave with three months’ severance pay.

In an email to the social media platform’s employees, seen by the Guardian, its new owner said building the next iteration of Twitter would require exceptional performance.

“Going forward, to build a breakthrough Twitter 2.0 and succeed in an increasingly competitive world, we will need to be extremely hardcore. This will mean working long hours at high intensity. Only exceptional performance will constitute a passing grade,” Musk wrote.

The message asked staff to click on a link if they want to be “part of the new Twitter” by 5pm New York time (10pm GMT) on Thursday.

Anyone who has not affirmed their commitment by that deadline, Musk said, would receive three months of severance pay.

“Whatever decision you make, thank you for your efforts to make Twitter successful,” Musk added in the email, which was first reported by the Washington Post.

Musk added that Twitter would be “much more engineering-driven” under his ownership and that “those writing great code will constitute the majority of our team”.

The ultimatum follows a severe jobs cull at Twitter at the beginning of November in which Musk laid off 50% of the 7,500-strong workforce within days of taking over the company. Musk also reportedly laid off more than 4,000 contractors, including members of Twitter’s moderation teams, over the weekend.

There has also been an executive exodus at the company, which began with the firing of the then chief executive, Parag Agrawal, after the takeover was completed and was followed this month by the resignation of key members of the remaining senior management team including the head of trust and safety, Yoel Roth.

Staff members who have criticised Musk over Twitter have also been let go, including Eric Frohnhoefer, a Twitter engineer who told Musk that a tweet about the platform had been incorrect. Musk subsequently tweeted: “he’s been fired”.

That post was later deleted, although Frohnhoefer, who has been approached for comment, has since tweeted a photo of a locked computer screen and discussed his departure with the tech newsletter Platformer.

Musk also announced late on Tuesday that the launch of a new verification scheme at Twitter would be delayed until 29 November. Attempts to revamp user identification have triggered a slew of fake accounts that led to the apparent suspension of the service last Friday and have consolidated an advertiser boycott that was already under way.

Musk wrote on Twitter that he was “punting relaunch of Blue Verified to November 29th to make sure that it is rock solid”. Twitter had launched its premium service, Twitter Blue, with an $8 monthly price tag that included a blue tick – which flags a verified, trustworthy account – on 9 November.

However, the move led to a number of mischievous users jumping on the opportunity to launch fake accounts. The pharmaceutical giant Eli Lilly and Co was forced to apologise after an impostor account, carrying a blue tick, tweeted that insulin was free. Nintendo, Lockheed Martin and Musk’s own Tesla and SpaceX were also impersonated, as well as the accounts of various professional sports figures.