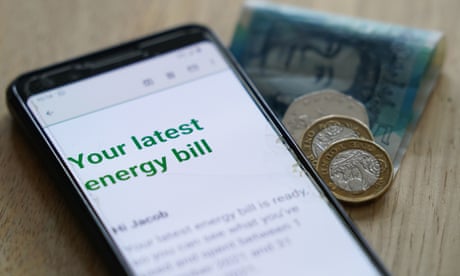 The cost to the government of shielding households from soaring energy bills is expected to double in the new year to up to £5bn a month after a hike in Ofgem’s price cap.

The energy regulator said on Thursday that its price cap will reach the equivalent of £4,279 a year for the average household from January.

Ofgem said the cap, which is adjusted every quarter, will increase by £730 for the three months from the start of next year. However, the government’s energy price guarantee (EPG) limits the typical annual bill in Great Britain to £2,500 in the same period.

The government provides energy suppliers with the difference between the unit rate under the EPG, and what they would have charged their customers were it not in place, a rate set by the Ofgem cap.

The energy supplier Ovo estimates the government will pay around 33p every time someone uses their oven for half an hour or an electric shower for six minutes.

The chancellor, Jeremy Hunt, said in last week’s autumn statement that the EPG will be lifted to £3,000 for a typical household from April, which should reduce the amount the Treasury must pay in subsidy.

The Treasury said last week that £1.8bn was paid out in October through the energy bills support scheme, reducing costs for more than 27m households. It said £136m worth of vouchers had been provided to traditional prepayment meter customers.

Separately, ministers are planning to launch a £25m public information campaign before Christmas to encourage people to save money and energy.

The campaign will advise eight changes to cut bills including reducing the temperature of boilers, turning off radiators in empty rooms and switching off electrical devices rather than leaving them on standby, The Times reported. The measures could save households up to £420 a year.

Truss had blocked a public information campaign, arguing it could be seen as “nannying” Britons.