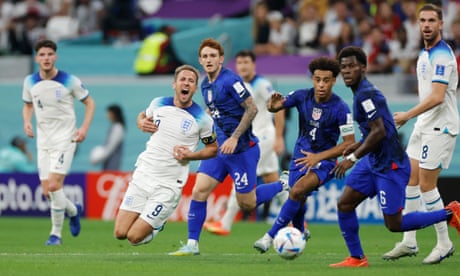 Jordan Pickford (GK) Relieved to see the USA spurn three big chances in the first half. Kept a clean sheet. 6

Kieran Trippier (RB) Ropey in possession and unusually shaky defensively. Lack of quality in attack was a concern. 5

John Stones (CB) Could have helped England by being more assertive in possession. Important block on Haji Wright. 6

Harry Maguire (CB) The big centre-back was one of England’s better players. Headed a lot of dangerous crosses away. 7

Luke Shaw (LB) Struggled to contain the USA’s surges down the right and his delivery was disappointing. 6

Declan Rice (CM) Overrun in defensive midfield and predictable on the ball. It was not his best evening. 5

Jude Bellingham (CM) The teenager was not as influential this time. Positioning was suspect and was deservedly replaced. 5

Bukayo Saka (RW) Caused problems early on but the USA got a grip of him. Became less effective. 6

Harry Kane (CF) The captain should have given England an early lead. Dropped deep but made little impact. 6

Raheem Sterling (LW) Made a chance for Mount but was rarely involved. Could not complain about going off. 5

Substitutes
Jordan Henderson (for Bellingham, 69): Helped England’s midfield with his experience and leadership. 7; Jack Grealish (for Sterling, 68): His trickery gave Gregg Berhalter’s side more to think about. 6; Marcus Rashford (for Saka, 78): Replaced Saka during the dying stages. 6

Matt Turner (GK) A sharp save from Mount kept the game level at half-time. Solid handling and decent distribution. 7

Walker Zimmerman (CB) A goal-saving block from a Kane shot allowed his side to grow into the game. 7

Antonee Robinson (LB) Tested by Saka and Bellingham but recovered from a nervy start. Slightly careless in possession. 6

Tyler Adams (CM) A controlled, efficient presence in a deep position. He passed well and made some important interceptions. 8

Substitutes
Brenden Aaronson (for McKennie, 77): A decent replacement for the tiring McKennie. 6; Shaquell Moore (for Dest, 78): Came on for the exhausted Dest. 6; Josh Sargent (for Wright, 83): Replaced Wright when the striker ran out of puff. 6; Giovanni Reyna (for Weah, 83): On too late to make an impact. 6