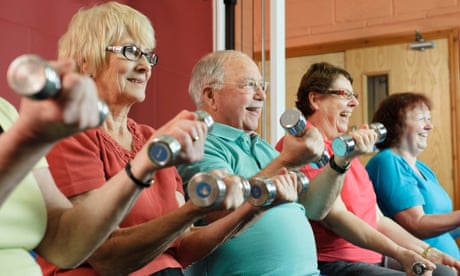 Regularly exercising with weights is linked to a lower risk of premature death, according to the largest study of its kind.

And ensuring your weekly exercise routine includes both weights and aerobic activities appears to have an even greater beneficial effect, researchers say. Their findings were published in the British Journal of Sports Medicine.

In addition, they are encouraged to do “strengthening activities” that work on the legs, hips, back, abdomen, chest, shoulders and arms at least two days a week.

While aerobic exercise is consistently associated with a lower risk of premature death, until now it was not clear if working out with weights might have similar effects.

In an attempt to plug this knowledge gap, the researchers set out to evaluate the potential impact of exercising with weights and aerobic activities on the risk of premature death among older adults.

Researchers led by academics at the US’s National Cancer Institute in Rockville, Maryland examined data on almost 100,000 adults taking part in a US screening study.

Participants, who had an average age of 71, gave information on their weightlifting activity and any other exercise they took part in.

Researchers deemed almost a third (32%) to be “sufficiently active”, with 24% meeting aerobic activity guidelines and 8% exceeding them.

The study found that adults who reported doing weightlifting had a 9% lower “all-cause mortality risk”. A similar observation was made for heart disease deaths but no link was found between weight training and cancer deaths.

Those who took part in “regular” weightlifting were found to have a 14% lower risk of death. Those who met the aerobic activity levels had a 32% lower risk of premature death.

Adults who reported meeting the aerobic activity guidelines and weightlifting at least one or two times every week were found to have a 41% to 47% lower risk of premature death.

The study focused only on weights, but there were other types of muscle strengthening exercise, said the researchers, such as push-ups (press-ups), squats, pilates, tuck jumps and burpees.

Using weights can make a body leaner: total lean mass is independently associated with a lower risk of premature death, the researchers explained. And if done in a gym, it could also be very sociable – another factor associated with a longer, healthier life.

“Our finding that mortality risk appeared to be lowest for those who participated in both types of exercise provides strong support for current recommendations to engage in both aerobic and muscle-strengthening activities,” the authors wrote. “Older adults would probably benefit from adding weightlifting exercises to their physical activity routines,” they concluded.