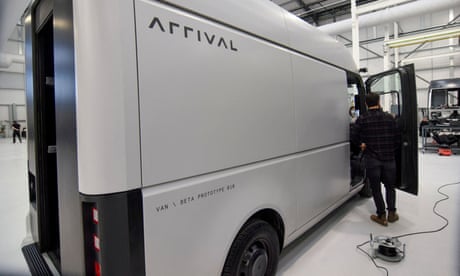 The founder of the electric van start-up Arrival has stepped aside as chief executive shortly after a chaotic strategy U-turn in which it shifted focus from the UK to the US.

Denis Sverdlov, a Russian telecoms billionaire, will be replaced by Peter Cuneo, the former head of Marvel Entertainment until its sale to Disney. Cuneo led the stock market listing early last year that injected $660m (£548m) into the company at the height of a global electric vehicle investment frenzy.

Sverdlov, who remains a major shareholder, will remain with the business, swapping roles with Cuneo, who has been serving as chair of the board.

Arrival has suffered a torrid year as a series of missed targets and a decision to ditch plans to produce vans and buses in the UK, despite having spent heavily on robot-heavy factories in Banbury and Bicester.

The Oxfordshire factories have been producing prototypes for several months, but Arrival cut 800 jobs in July and said last month it would stop work in the UK to focus on a separate factory in South Carolina. This month it said it did not have enough cash to continue as a going concern.

The repeated setbacks have driven down the value of its shares by more than 95%. At its height the company was valued at more than $15bn on the Nasdaq in New York, but on Thursday it was valued at only $215m.

The huge valuation enjoyed by Arrival briefly made Sverdlov one of the wealthiest people in the UK, with a fortune valued at £6bn soon after the listing. However, the value of the 65% stake in Arrival held by his investment fund was worth less than £150m on Thursday.

He initially made his money in the Russian telecoms company Scartel, and served just over a year in the cabinet of the then Russian prime minister Dmitry Medvedev’s cabinet. Sverdlov said this year that he no longer has any connections to Russia’s government.

Sverdlov had gained the backing of some of the world’s biggest companies, including the investment manager BlackRock, carmaker Hyundai, and global delivery company UPS, which is meant to be one of its first customers. However, some insiders have complained that the company was too ambitious, simultaneously trying build a van, a bus and a car.

Arrival also announced the resignation of Avinash Rugoobur, the chief of strategy, who was one of its earliest senior hires from within the automotive industry and a key spokesperson for the company. Rugoobur resigned “for personal reasons” but will remain a board member, Arrival said.

In a statement, Cuneo said he wanted to ensure “the company executes on its next set of strategic goals” and said he looked forward to “working closely with Denis” and Arrival employees.

Sverdlov said: “I am more committed than ever to ensuring Arrival’s success, and I will continue to act in the best interests of the company, shareholders, customers, partners and employees.”