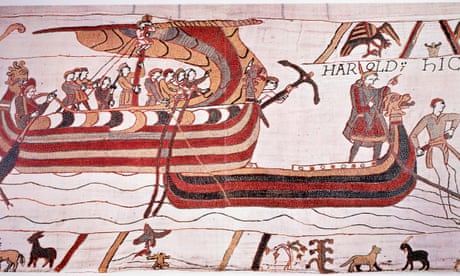 On 27 September 1066, William, Duke of Normandy, set sail in La Mora, the flagship of a huge fleet that would invade and conquer England. Now a historical society on France’s Normandy coast is going to re-create the ship that launched almost 1,000 years of cross-Channel enmity.

The Bayeux tapestry, a 70 metre-long (230ft) embroidered account of the Norman Conquest, depicts La Mora as a Viking-style longship with a striped red and gold sail flying the papal banner on its masthead. On board was William, his most trusted knights, their entourage and horses, and 60 oarsmen.

The rest, as they say, is history. King Harold was defeated in the Battle of Hastings 17 days later, and the Norman duke became William the Conqueror, King of England.

The €13m (£11m) project will re-create the 34-metre-long, 5-metre-wide La Mora, which carried 70 crew including the oarsmen, in a former industrial warehouse near the quay of the port of Honfleur.

Olivier Pagezy, president of the La Mora project, says the builders do not have much to go on. No original plans and few details of the actual ship survive except those depicted in the tapestry, where it was shown with the gilded statue of a child pointing to England on its stern and the head of a lion, the symbol of royal power, with its tongue sticking out at its prow.

“We have the Bayeux tapestry and a plan of La Mora’s sister ship, as well as similar ships that are represented in museums in Denmark and Norway, where these kind of craft were originally built,” said Pagezy. “Our architect is confident we can reproduce the ship as authentically as possible.”

The project’s scientific committee is also in close contact with the Roskilde Museum in Denmark, which has created replicas of a number of 11th-century ships using techniques based on the discovery of ancient wrecks in 1962.

The naval architect Marc Ronet, who is overseeing the project and drew up the initial plans for La Mora II, says it was a Viking-type warship, powered by oar and a 150-metre square sail, and was narrow and shallow, meaning it was fast. So fast, the history books tell us, that after setting sail from the village of Barfleur on the evening of 27 September 1066, the next morning William had to wait in the middle of the Channel and have breakfast with wine while the rest of his fleet, carrying more than 7,000 men and 2,000 horses, caught up.

The fleet landed at Pevensey in East Sussex later that day and went on to defeat King Harold in Hastings on 14 October. “Contrary to how it is done today, the construction of an esneque (Norse warship) is made with the planks of the outer shell fitted first, before the frame or skeleton is fitted. This method requires a very particular know-how and fewer tools, but it is also a reflection of the means available in the 11th century,” Ronet said.

“The way they cut the wood, planed the boards and assembled the pieces is linked to the tools of the 11th century. The carpenters of the time used green wood, which was easier to bend. After felling the oaks, they split them with wedges and sledgehammers, and then cut the boards to make the planks. The point of splitting the wood is to let it run its own course: in the end, the planks are stronger and thinner, and the boats are lighter.”

As with the project to build a medieval castle at Guédelon in Burgundy using 13th-century techniques, which are also proving useful in the reconstruction of Notre Dame Cathedral in Paris, reproducing La Mora will involve long-forgotten skills. “Marine carpenters will have to relearn these techniques that are no longer used today,” said Ronet.

Another challenge is to have the ship certified as seaworthy. “European standards obviously do not take into account 11th-century ships. However, La Mora’s 34-metre length makes it a large pleasure boat! We are working with the [European Commission’s] Maritime Affairs to find technical solutions to meet current safety standards,” said Ronet.

The first €7m phase of the project will involve converting the site into a tourist and exhibition centre to be opened at the end of next year, after which the €5m second phase, to build the replica, will begin. Paying visitors will see the work as it progresses.

Although Honfleur has no historical connection with the Norman conquest, Pagezy says the site was the most suitable, and the exhibition space will reflect more widely the region’s maritime history, and could attract 200,000 tourists a year. It is hoped that the new Mora will be ready to sail the Channel in 2027 to mark the 1,000th anniversary of William’s birth. This time, says Pagezy, the French come in peace. He also hopes the project will spark interest and sponsorship in the UK.