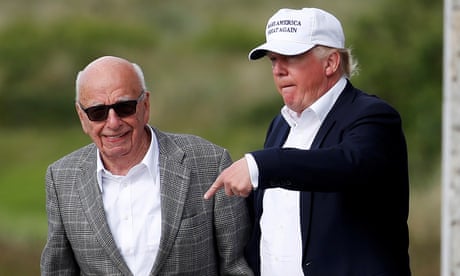 On election day, Donald Trump was clear about how his efforts to support Republican candidates should be seen.

“Well, I think if they win, I should get all the credit,” Trump told NewsNation. “If they lose, I should not be blamed at all.”

Unfortunately for Trump, he did not get what he hoped for. Instead the former president has seen conservative news outlets, the Rupert Murdoch-owned ones in particular, turn on him, in some cases with gleeful abandon.

“Trumpty Dumpty” blared the front page of Thursday’s New York Post, the tabloid Murdoch has owned since 1976. Editors went so far as to mock up Trump as Humpty Dumpty, his enlarged orange head stuffed into a white shirt and a signature red tie.

Next to the picture of Trump as an egg perching precariously on a brick wall, the text goaded: “Don (who couldn’t build a wall) had a great fall – can all the GOP’s men put the party back together again?”

The Post cover offered the most visceral insight into Murdoch’s thinking, and its contempt was far from an outlier in the mogul’s news empire.

The piece was just as scathing as the headline, running through nine races this November the paper said Trump had effectively tanked through his continued election denial, his various wars with more moderate Republican candidates and his general unpopularity nationwide.

“Since his unlikely victory in 2016 against the widely disliked Hillary Clinton, Mr Trump has a perfect record of electoral defeat,” the editorial said.

“The GOP was pounded in the 2018 midterms owing to his low approval rating. Mr Trump himself lost in 2020. He then sabotaged Georgia’s 2021 runoffs by blaming party leaders for not somehow overturning his defeat.”

It added: “Now Mr Trump has botched the 2022 elections, and it could hand Democrats the Senate for two more years.”

Trump-backed candidates lost in several key states on Tuesday, including Pennsylvania, where Mehmet Oz, a celebrity doctor running for Senate, and Doug Mastriano, an election-denying extremist running for governor, were both thwarted.

What was most crushing for Trump were the states where candidates he endorsed were outperformed by those he hadn’t.

Herschel Walker, the retired football star endorsed by Trump in Georgia for the Senate, will head to a runoff against Raphael Warnock, the Democratic incumbent, after neither man won more than 50% of the vote. Brian Kemp, the unendorsed Republican, cruised to victory in the governor’s race against Stacey Abrams, his Democratic opponent.

The biggest winner of the midterm elections was Ron DeSantis. The biggest loser was Donald Trump

Murdoch had his doubts about Trump before the businessman and reality TV star ran for president in 2016. Even when Trump won, Murdoch was unconvinced, reportedly privately calling him a “fucking idiot” following one conversation about immigration.

Some Murdoch outlets, including Fox News, notably backed away from Trump over the summer, giving him less airtime. In her book Confidence Man: The Making of Donald Trump and the Breaking of America, Maggie Haberman, a reporter for the New York Times, said Murdoch had been keen to wash his hands of Trump after the 2020 election.

“‘We should throw this guy over,’ Murdoch said of Trump, exhausted by Trump’s refusal to concede and his almost manic speech on election night,” Haberman wrote.

But the speed and comprehensiveness of this week’s step-away still came as a surprise. There was a sense it was preplanned, that Murdoch subordinates decided in advance not just that Trump was done, but also on the identity of their new man.

The day before Trump was presented as an egg on legs in the New York Post, the paper celebrated the re-election of Ron DeSantis, the Trump-esque Florida governor rumored to be planning a presidential run, with a front page which declared him “DeFuture”.

Even Fox News, once Trump’s safe space, the TV network where he would often just call in for a chat, seems to have officially moved on.

The channel offered scant defense of Trump in its analysis of election night, while on the Fox News website, the article leading the opinion page on Thursday was headlined: “Ron DeSantis is the new Republican party leader.”

It seems Rupert Murdoch already has.