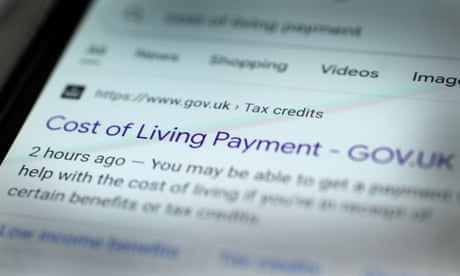 As I’m paid weekly, I could lose cost of living payment

I am a 55-year-old IT apprentice, and my low income means I qualify for universal credit. But because my wages are paid weekly, I’m worried I’m going to miss out on the government’s cost of living payment again.

Universal credit is calculated on a monthly basis, so, in four months of the year, when my claim is based on five weeks’ pay, rather than four weeks’, I don’t receive any money.

I missed out on the first £326 because the assessment period was one of the months when my claim was based on five weeks’ earnings.

The Department for Work and Pensions (DWP) has announced the qualification period for the second payment of £324, and I think the same thing is going to happen again, because they’ve picked an assessment period where my universal credit is again based on five weeks pay.

This is ridiculous. I’m being unjustly punished for being paid weekly, instead of monthly.

These are tough times but you had jumped the gun on this as, when we contacted the DWP on your behalf, it confirmed you would, in fact, be eligible for the second payment of £324, which will be paid by the government next month.

The £650 cost of living payment, which was announced earlier this year by the then chancellor Rishi Sunak, was split into the two lump sums of £326 and £324.

You are eligible for the second payment if you received a universal credit payment in an assessment period that ended between 26 August and 25 September 2022.

The government website warns that you won’t receive the cash giveaway if your earnings reduce the benefit to £0 (called a nil award) in this key window, which is what you were worried about.

The payments will land in bank accounts between 8 and 23 November.

Earnings patterns vary substantially, making it difficult for the DWP to choose qualifying dates that would work for every person on universal credit.

However, it has left a gap of more than three months between the qualifying periods which it thinks will reduce the risk that those with non-monthly pay periods miss out altogether.

The DWP says the vast majority of people who receive universal credit will qualify for a cost of living payment but “inevitably, a small number will be ineligible on the qualification dates because of a change of income, earnings or other circumstance”, adding “all claimants have the right to appeal their entitlement”.

We welcome letters but cannot answer individually. Email us at [email protected] or write to Consumer Champions, Money, the Guardian, 90 York Way, London N1 9GU. Please include a daytime phone number. Submission and publication of all letters is subject to our terms and conditions