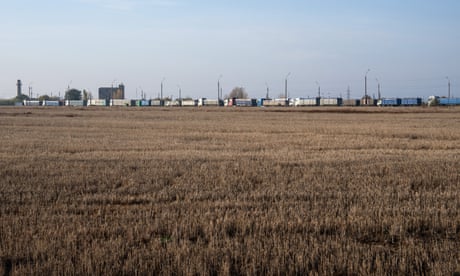 Up to 60 Ukrainian grain ships can be sent by the middle of next year to some of the world’s poorest countries in Africa, Volodymyr Zelenskiy, the Ukrainian president, said in a statement released to the Guardian.

In a move that challenges the Russian narrative that the west’s response to its war on Ukraine has aggravated pre-existing food shortages in Africa, Zelenskiy said ships moving out of the Ukrainian port of Odesa can reach humanitarian hotspots such as Sudan, Yemen and Somalia, but only so long as international funding comes forward to subsidise the grain.

The scheme is being organised by a mix of government entities, NGOs and private corporations. The first three ships were due to leave Odesa for Sudan, Somalia and Yemen, although a German-funded ship has already left for Ethiopia.

Zelenskiy said he was launching the programme on the anniversary of the Holodomor, when millions of Ukrainians starved to death in a man-made famine from 1932-33. The programme is being supported by a new international coordination group for the prevention of hunger.

Zelenskiy said in a statement: “Even as the country struggles with food shortages, devastated farmland, and widespread blackouts, we will never forget our role as a responsible global citizen – especially having experienced famine as a nation ourselves. Africa is in desperate need of food and Ukraine stands ready to support vulnerable people in their hour of need.”

Andriy Yermak, the head of the president’s office, said the launch represents a key historical moment not only for Ukraine but for all countries facing severe food shortages due to the ongoing conflict. Yermark called on the international community, including private foundations, to help fund the cost of sending the food to hunger-riven countries.

Russia agreed to extend the Black Sea corridor grain deal last week for a further 120 days. Since the deal was first launched – lifting the Russian blockade on Ukrainian grain across the Black Sea towards Turkey – a total of 11m tonnes of Ukrainian agricultural products had reached 38 countries.

But some of the poorest countries were priced out of the market due to the high price of grain. The new mechanism is designed to ensure that the market pressures sending grain to wealthy areas such as Europe can be countered. The essence of the programme, entitled Grain from Ukraine, is that the countries participating in the project buy agricultural products from Ukrainian producers – the priority is small and medium-sized enterprises – and transfer them to countries on the verge of starvation.

The US Agency for International Development (USAID) has already agreed to provide up to $20m through the UN World Food Programme. James Cleverly, the British foreign secretary, also announced extra funds on his visit to Ukraine on Thursday.

Egypt and Madagascar are dependent on either Russia or Ukraine for more than 70-80% of their wheat, while Somalia imports more than 90% of its wheat requirement. Eritrea imports 100% of its grain from Ukraine and Russia.