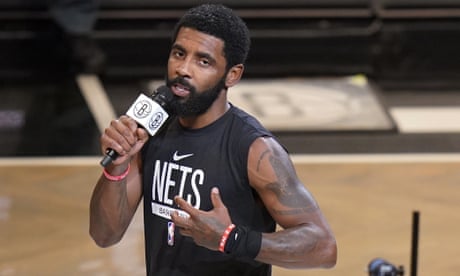 Kyrie Irving will end his suspension from the Brooklyn Nets and return to the team after he issued an apology for linking to an antisemitic film.

“Kyrie took ownership of his journey and had conversations with several members of the Jewish community,” the Nets said in a statement on Sunday. “We are pleased that he is going about the process in a meaningful way.”

Irving first caused controversy after posting a link on Twitter to a film called Hebrews to Negroes: Wake Up Black America. The documentary is based on a book that claims, “that many high-ranking Jews have reported to worshiping Satan and Lucifer”. The film’s director is a holocaust denier and provides a fabricated quote from Adolf Hitler in the film to promote an antisemitic conspiracy theory.

Irving initially refused to apologize for his actions and would not directly answer questions about whether he held antisemitic beliefs. The Nets subsequently suspended the seven-time All-Star for a “failure to disavow antisemitism”.

However, on Saturday Irving was more contrite. “I’m not antisemitic,” Irving said in an interview with SNY. “I never have been. I don’t have hate in my heart for the Jewish people or anyone that identifies as a Jew. I’m not anti-Jewish or any of that. And it’s been difficult to sit at home with my family with them seeing all of this and having questions.”

The 30-year-old added: ““I just really want to focus on the hurt that I caused or the impact that I made within the Jewish community,” Irving told SNY. “Putting some type of threat, or assumed threat, on the Jewish community, I just want to apologize deeply for all my actions for the time that it’s been since the post was first put up. I’ve had a lot of time to think, but my focus initially, if I could do it over, would be to heal and repair a lot of my close relationships with my Jewish relatives, brothers and sisters.”

The Nets play the Memphis Grizzlies on Sunday. The team have gone 5-3 since Irving was suspended.