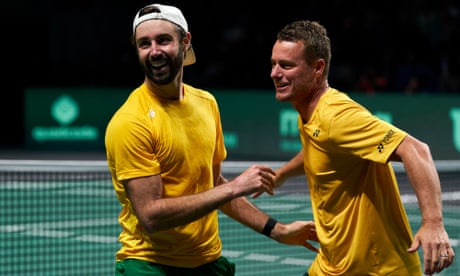 Jordan Thompson and Alex de Minaur have taken a leaf out of their captain Lleyton Hewitt’s book, fashioning brilliant backs-to-the-wall singles wins to propel Australia into the semi-final of the Davis Cup in Malaga.

Thompson vindicated the tough call from Hewitt to choose him ahead of Thanasi Kokkinakis for the opening singles match of Tuesday’s quarter-final against the Netherlands by coming from a set down to defeat Tallon Griekspoor 4-6 7-5 6-3.

Then de Minaur continued his remarkable run of success in the World Cup of men’s team tennis in an equally compelling contest, winning his ninth singles rubber in his last 10 outings, also having to rally to beat Dutch No 1 Botic van de Zandschulp 5-7 6-3 6-4.

It sealed Australia’s triumph 2-0 without Wimbledon champions Max Purcell and Matt Ebden being required to win a deciding doubles, and set up their first last-four clash in the Davis Cup for five years as they aim for a 29th title - 19 years since they last won in 2003.

On Friday, they’ll face either hosts Spain, the six-times champions, or Croatia for a place in Sunday’s final.

Thompson, brought in late by Hewitt, produced a battling performance that earned him a big hug from his captain - and he admitted that his skipper’s presence on the team bench felt inspirational.

“Of course, I’d missed the Davis Cup, and I was extremely honoured (to learn I’d been picked). I’d do anything to win in the green and gold and I hadn’t played since March 2020,” explained Thompson.

“Me and Alex, we looked up to Lleyton. I think probably for both of us, (he was) our tennis idol. So to see him on the side of the court and having his same fighting spirit is something I’m sure he loves to see. When he’s on the sideline, I couldn’t feel more comfortable.”

Thompson was evidently considered by Hewitt to be a better bet first up than Kokkinakis, who’s only had 10 singles matches since the start of July and is ranked 11 places below Sydney’s world No 84.

Yet it was Griekspoor who took the game to the Aussie, his powerful forehand giving him early control but Thompson had more joy working to the 26-year-old’s backhand in the second stanza.

Still, as Griekspoor began to visibly tire in an epic 80-minute set that featured one game lasting nearly a quarter-of-an-hour, there was a crisis point for Thompson when the Dutchman earned a break point at 5-5 which may have felt like a match point if he’d converted.

But when Thompson held, then won the set with a flashing backhand pass, he was in control - and a break in the fifth game of the decider proved crucial as he went on to prevail after a near three-hour dogfight.

De Minaur was just as indomitable, coming up with his finest tennis in a crucial penultimate game hold littered with dazzling winners from both players.

But after missing out on a break point, van de Zandschulp’s spirit seemed to sink as he then coughed up a double fault en route to being broken to love.

“It feels great. It was a hell of a fight,” de Minaur said. “Jordan played his heart out and it really inspired me. I just fought to the end, a never-say-die attitude.”

In the other quarter-finals, Italy will take on the United States while Germany take on Canada.