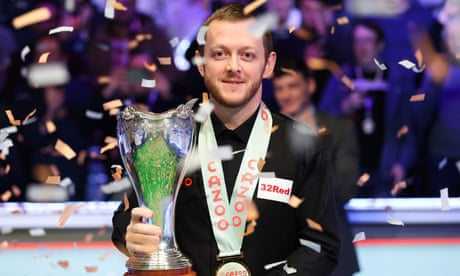 The Northern Irishman has come from behind in every match this week and did it again at the York Barbican to win his second triple crown title.

“It’s absolutely amazing and I don’t really know how I have won that,” said Allen. “I’ve not played well most of the week, I didn’t play well in the first session and got punished.

“I hung in and secured the last frame and after my first break of 60 [in the second session] I felt so good and started to score.

A resurgent Ding, who whitewashed the world No 1, Ronnie O’Sullivan, in the quarter-finals, looked in fine form in the afternoon session as he raced into a 6-1 lead with three centuries. Allen looked listless, perhaps jaded after his late-night win on the final black over Jack Lisowski on Saturday night, though he did win the final frame of the session to trail 6-2.

In the evening it was a different story as Allen came out looking much more positive. He has played a more considered, patient game for much of this tournament but returned to his more natural attacking game and blitzed through the first four frames of the session to level at 6-6, at one point scoring 357 points without reply. He then added two more to make it seven frames in a row, to lead 8-6.

Now it was Ding’s turn to look out of sorts as he seemed powerless to respond to Allen’s onslaught. Full credit to him, though, as he replied with a fine 105 break to pull back to 8-7. But Allen then took the next two to complete an amazing comeback.

His victory continues a fine season, with this his second trophy after he successfully defended the Northern Ireland Open title in October. He also lost to Ryan Day in the final of the British Open. It is some turnaround after his struggles with off-the-table issues in recent years, including being declared bankrupt in May 2021.

He shed four stone in the summer and returned looking meaner and more confident. His second title of the season lifts him to No 5 in the world, after he started the season just inside the top 16. He has completed the second leg of the triple crown, after winning the Masters four years ago. Thoughts will now turn to the world championship in April, where he has a poor record for someone of his talent.

Ding has enjoyed a resurgence of his own in this tournament after three years in the doldrums since winning his 14th ranking title here in 2019. He had slipped to No 38 in the world but this performance lifts him up to No 19, within touching distance of the top 16 who qualify automatically for the world championship.

But as Allen came back at him there were signs that the old frailties were returning. He is a fine front runner but seems to struggle when the pressure is on. He entered this tournament, remarkably, as the eighth-highest ranked Chinese player, and has seen his compatriots Yan Bingtao and Zhao Xintong win triple crown events in the last two seasons.

Ding’s excellent form here gave him hope of adding a fourth UK Championship title but it was not to be as Allen’s doggedness and determination proved too much for him.