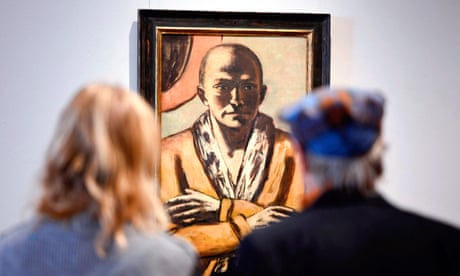 A moody self-portrait of the 20th-century expressionist Max Beckmann painted during his Dutch exile from the Nazis is predicted to break the record for a price secured at auction in Germany when it goes under the hammer in Berlin next week.

Art lovers have been flocking first to New York and then to Berlin to see the painting in preview showings, which have offered a rare opportunity to view a masterpiece that has always been in private hands.

It is unlikely to be bought by a museum at the sale on 1 December owing to its astronomical price, but instead could go to another individual collector, meaning it may not be possible to see it again.

Selbstbildnis gelb-rosa (Self-Portrait Yellow-Pink), painted between 1943 and 1944, is valued at between €20m and €30m, the highest presale tag put on an artwork in Germany, in what market experts suggest may herald a prestigious new era for German art auctions.

The Villa Grisebach auction house has for years been in the shadow of its better-known New York and London competitors such as Christie’s and Sotheby’s. Grisebach’s director, Micaela Kapitzky, said she welcomed the long overdue attention that the sale – the result, she said, of years of building trust with the painting’s owner – was now bringing to Germany’s art market.

“It is a great sign of trust in the German market, and this marks a unique chance for collectors which won’t come around again,” she said. Having had the privilege of having the painting in her own office before it went on display, she said, “whoever is lucky enough to own this will recognise what an enjoyable presence he is. Despite the difficult circumstances in which it was created, the figure exudes an incredible strength and warmth. He’s ever-present, helped by his larger-than-life size, and doesn’t let you go.”

Beckmann left Germany for Amsterdam in 1937 a day after hearing Adolf Hitler deliver a speech condemning “degenerate” artists. Authorities subsequently confiscated 500 of his works from museums. Beckmann and his wife, Mathilde, known as Quappi, would never return, emigrating to the US a decade later, where he died in 1950.

When Amsterdam was invaded by German troops in 1940, it was no longer a safe haven, and he withdrew into his studio in an old canalside tobacco warehouse, where his painting, particularly his self-portraits, became a key to his survival, or as the art critic Eugen Blume said, “emblematic expressions of the spiritual crisis he endured”. The decade spent in Amsterdam became his most prolific period.

“Beckmann had to watch helplessly as the German occupiers interned Dutch Jews, among them personal friends of his, at the Westerbork concentration camp,” according to Blume. Beckmann narrowly avoided being called up himself owing to heart disease, but he lived in constant fear that he might be arrested or his paintings confiscated. “Withdrawing into his atelier … became a self-imposed obligation that protected him from breaking down,” Blume said.

The artist wrote in his diary: “Silent death and conflagration all around me and yet I still live.”

According to Kapitzky, Beckmann “gifted several of his self-portraits to Quappi, then variously took them away from her to give to friends or sell. But this one she clung on to and never let go up until her death in 1986.

“Very possibly this is because of what it stood for,” she added. “He has painted himself as a young man and it is full of vitality and an internal strength and defiance, his will to overcome this difficult time, and there is also his calm, enigmatic smile.”

Art historians are struck by Beckmann’s unusual use of bright colours in the work, especially the yellow fabric and lively fur trim of what is possibly a dressing gown, or a nod to his portrayals of what he called his “artist king” figure, expressing sovereignty over his own self, at a time when he often felt trapped.

But this image was to become increasingly overshadowed by his refugee status, with Beckmann describing the figure he embodied as “searching for his homeland, but having lost his home along the way.”

The work is being sold by the family of a commercial lawyer from Bremen who had lived in Switzerland until his death in 2006, who had acquired it from the Beckmann family. The self-portrait was considered the most prized item in his art collection, which included other Beckmanns and Pablo Picasso graphics, some of which have already been auctioned in New York.

Martin Krause, of Grisebach, who will conduct the auction, said the price estimate of up to €30m was realistic. Another Beckmann painting, Bird’s Hell, sold at Christie’s in London five years ago for £36m (€41m at the time), and its asking price had been much lower than the painting currently for sale. His Self-portrait with Trumpet sold at auction in New York for $22.5m more than two decades ago.

It was another Beckmann painting, The Egyptian, from 1942, that in 2018 reached what is currently the highest price ever to have been raised at a German auction – €4.7m, more than double its €2m estimate.

“If previous Beckmann auctions are anything to go by, and owing to the rarity of this work, we are expecting a large number of potential buyers, in the room, online and on the phone, and for the competition to be fairly fierce and fervent,” Krause said. “My job will be to stay as cool as I can in the heat of the drama.”