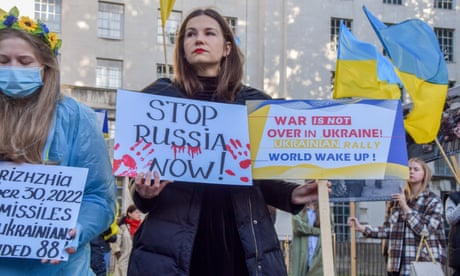 Net migration to the UK has reached a record level of 504,000 after the arrival of Ukrainians and Hongkongers under government schemes and a jump in the number of international students.

Asylum applications are at their highest for 32 years, but nearly 100,000 people are waiting more than six months to have their initial claims processed, official government data shows.

The new net migration figure released by the Office for National Statistics (ONS) is an increase of 331,000 in a single year and is at least 400,000 more than the home secretary, Suella Braverman, is aiming for. She promised in September she would try to get overall migration down to “tens of thousands”.

It comes just days after the prime minister, Rishi Sunak, pledged to cut overall migration – a promise previously made by David Cameron and Theresa May but never achieved.

The increase stems from a rise in visas for foreign nationals to live, study and work in the UK, which exceeded 1 million for the first time in the year to June.

The imbalance means that while far more non-EU nationals are likely to have arrived in the UK than left during these 12 months, the reverse is true for EU nationals, with more leaving than arriving.

The ONS said the UK was living through a “unique” period when travel was recovering after Covid 19. The statistics also show that the number of people applying for asylum – 72,027 – was the highest for nearly 20 years.

The backlog on asylum decisions is now 143,377, with nearly 98,000 people waiting for more than six months. Just 41% of applications for asylum come from people who have travelled to the UK in small boats, the statistics show.

“These include the end of lockdown restrictions in the UK, the first full period following transition from the EU, the war in Ukraine, the resettlement of Afghans and the new visa route for Hong Kong British nationals, which have all contributed to the record levels of long-term immigration we have seen.

“Migration from non-EU countries, specifically students, is driving this rise. With the lifting of travel restrictions in 2021, more students arrived in the UK after studying remotely during the Covid-19 pandemic.

“However, there has also been a large increase in the number of people migrating for a range of other reasons. This includes people arriving for humanitarian protection, such as those coming from Ukraine, as well as for family reasons.

“The many factors independent of each other contributing to migration at this time mean it is too early to say whether this picture will be sustained.”

Enver Solomon, the head of the Refugee Council, said: “These statistics underline yet again the government’s neglect and mismanagement of the asylum system.

“The number of men, women and children now living in limbo has risen by 20,000 in just three months, meaning 143,000 are now waiting for an initial decision on their case, with just under 98,000 waiting more than six months.

“Given the number of asylum applications which are agreed is at its highest level for 32 years – reflecting the global refugee crisis with millions of people fleeing their homes because of war, conflict and persecution – these new Home Office statistics underline why urgent action from government is so important.”