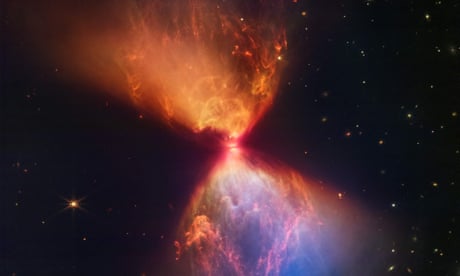 The James Webb space telescope has revealed its latest image of celestial majesty, an ethereal hourglass of orange and blue dust being shot out from a newly forming star at its centre.

The colourful clouds are only visible in infrared light, so had never been seen before being captured by Webb’s Near-Infrared Camera (Nircam), Nasa and the European Space Agency said in a statement on Wednesday.

The very young star, known as protostar L1527, is hidden in darkness by the edge of a rotating disk of gas at the neck of the hourglass.

However, light spills out from the top and bottom of the disk, lighting up the hourglass-shaped clouds.

The clouds are created by material ejected from the star colliding with surrounding matter, the statement said. The dust is thinnest in the blue sections and thickest in the orange parts, it added.

The protostar, which is just 100,000 years old and at the earliest stage of star formation, is not yet able to generate its own energy.

The surrounding black disk, which is about the size of our solar system, will feed material to the protostar until it eventually reaches “the threshold for nuclear fusion to begin”, the statement said.

“Ultimately, this view of L1527 provides a window into what our sun and solar system looked like in their infancy,” it added.

The protostar is located in the Taurus molecular cloud, a stellar nursery home to hundreds of nearly formed stars around 430 light years from Earth.

Operational since July, Webb is the most powerful space telescope ever built, and has already unleashed a wealth of unprecedented data as well as stunning images. Scientists are hopeful it will herald a new era of discovery.

One of the main goals for the $10bn telescope is to study the life cycle of stars. Another main research focus is on exoplanets, planets outside Earth’s solar system.