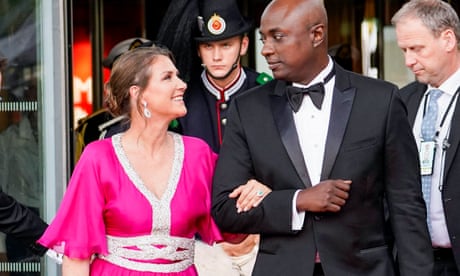 Princess Märtha Louise of Norway has relinquished her royal duties to focus on her alternative medicine business with her fiance, a self-proclaimed shaman, the palace has said.

The 51-year-old princess’s relationship with Durek Verrett, a Hollywood spiritual guru, caused waves in Norway after the “sixth-generation shaman” suggested in his book Spirit Hacking that cancer was a choice.

He also sells a medallion on his website labelled a “Spirit Optimizer”, which he claims helped him overcome Covid-19.

A poll in September found 17% of Norwegians now have a lower opinion of the generally popular royal family, nearly all citing the princess and the shaman as the reason.

“The princess ... is relinquishing the role as royal patron ... and will not be representing the royal house at the present time,” the palace said in a statement.

However, “in accordance with the king’s wishes, the princess will keep her title”.

The palace said that once the princess and Verrett were wed he would become a member of the royal family but would not have a title or represent the monarchy.

Märtha Louise, who claims to be able to speak with angels, lost her honorific “Her Royal Highness” title in 2002 when she chose to work as a clairvoyant. In 2019, the divorced mother of three agreed not to use her title as princess in her commercial endeavours.

The couple have agreed to refrain from any association with the royal family in their social media channels, media productions and commercial activities. “This is intended to draw a dividing line that more clearly separates commercial activity from the royal house of Norway,” the palace said.

In the same statement, Märtha Louise said she was “aware of the importance of research-based knowledge”.

“I also believe, however, that there are components of a good life and sound physical and mental health that may not be so easy to sum up in a research report.”

She said “spirituality, intimacy with other people and animals, yoga and meditation” could be important supplements, as could “a warm hand, an acupuncture needle, a crystal”.

She said she felt it was important “to distinguish between myself as a private person on the one hand and as a member of the royal family on the other”, and hoped her personal views would be treated as her own “without others having to answer for them”.