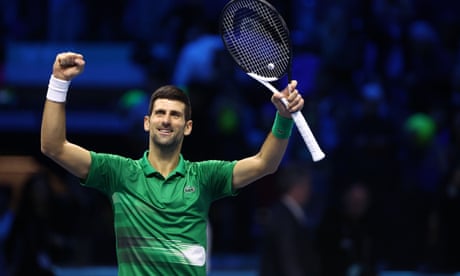 Norwegian Casper Ruud is all that stands between Novak Djokovic and a record-equalling sixth ATP Finals title, after the Serbian former No 1 beat American Taylor Fritz 7-6(5) 7-6(6) in the Turin semi-final.

The 21-times major champion overcame a barrage of aces from Fritz, outlasting the Indian Wells winner despite having a bad day in his own opinion, and produced fewer errors at the Pala Alpitour to move to within one win of matching Roger Federer’s record at the season finale.

“I had to fight to survive,” the 35-year-old said. “I didnnt feel very reactive today or very comfortable... I am very pleased to have overcome this one as I donn’t think it was one of my best days with my tennis but I managed to hang in there.”

If Djokovic wins the final, he will claim the biggest prize in tennis history, cashing in $4,740,300 for lifting the tournament trophy undefeated. But he will have to tame Ruud first, who confidently swatted aside an error-prone Andrey Rublev 6-2 6-4 in their semi-final.

Rublev unravelled quickly, punching his bench in frustration after dropping his serve for the second time in the first set, and Ruud added to the pain when he broke the Russian again to open the second set.

It appeared to be all but over as Ruud carried the next three games as well but Rublev got a hold of his lethal forehand to break the twice major finalist in the eighth game Ruud quickly extinguished that momentum, however, holding his arms out wide after clinching the match with a backhand winner down the line.

“It’s tough sometimes because things are obviously going great, but sometimes they can go almost too well,” Ruud said. “Andrey hit some great returns, aggressive with the forehand... I wasn’t stressing too much. Everything sort of was going my way today.” Djokovic and Ruud will face off in the final on Sunday.