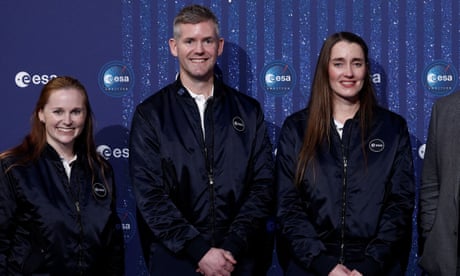 A Paralympic sprinter from the UK has been named among the latest intake of astronauts recruited by the European Space Agency.

John McFall, 41, becomes the first astronaut with a physical disability, or para-astronaut, to be recruited by the space agency in a drive to overcome the barriers that prevent disabled people from participating in space missions.

Also selected was Dr Rosemary Coogan, 31, who spent time in the Royal Navy reserve and gained a PhD in astronomy before working at the French Space Agency, joins the astronaut class of 2022, the agency’s first new recruits since 2008.

Coogan becomes the first woman to join ESA as a career astronaut and the second person from the UK to join the agency’s astronaut corps after Tim Peake, a member of the class of 2009.

Another UK-born scientist, Dr Meganne Christian, 35, who worked in Antarctica before lecturing in Italy on problem solving and decision-making, joins ESA’s astronaut reserve.

A new venture for ESA, the reserve consists of astronauts who passed the selection process but will continue in their regular jobs until a mission opportunity arises.

Announcing the new intake at the Grand Palais Éphémère in Paris, ESA’s director general, Josef Aschbacher, said they were all “incredible people” chosen for their intellectual capabilities, their ability to make quick decisions under pressure, and to “push the right buttons and not the wrong ones”.

The class of 2022 will train for missions that usher in a new era of human spaceflight. They will focus less on the International Space Station and more on the construction of a new outpost that will orbit the moon, alongside missions to the lunar surface itself.

The European Space Agency hopes to land its first astronaut on the moon before the end of the decade in preparation for future missions to Mars. Humans have not set foot on the moon since Apollo 17 in December 1972.

Only 1,361 applicants made it to the second stage of selection, along with 27 of the 257 candidates with physical disabilities.

McFall, who said he hoped to “bring inspiration” to others, had to meet all of the demanding psychological, cognitive, technical and professional requirements for the astronaut corps.

Candidates were considered if they had specific lower limb deficiencies, such as a lower leg amputation, shortened limbs at birth or as a result of an accident, or were less than 130cm tall.

Christian gained a PhD in industrial chemistry from the University of New South Wales and worked at the Concordia station in Antarctica from 2018 to 2019.

McFall, who lost his right leg in a motorcycle accident, will join ESA’s parastronaut feasibility project as part of an effort – the first by any of the world’s space agencies – to identify and overcome hurdles that have until now barred people with physical disabilities from joining space missions.

The agency expects to work out adaptations to space hardware that enable people with physical disabilities to serve as professional crew members.

ESA’s web pages note that the agency cannot guarantee a flight for the disabled astronaut, but adds that it can “commit to trying as hard and seriously as we can”.

The greatest proportion of respondents to ESA’s advert, nearly a third, came from France, followed by a sixth from Germany and 2,000 from the UK. The new recruits will be based at the European Astronaut Centre in Cologne and train for at least three years at facilities in Germany, the US and elsewhere. To prepare them to work well under pressure, in a confined space and with minimal privacy, equipment and comfort, the astronauts take part in a three-week course in a network of caves.