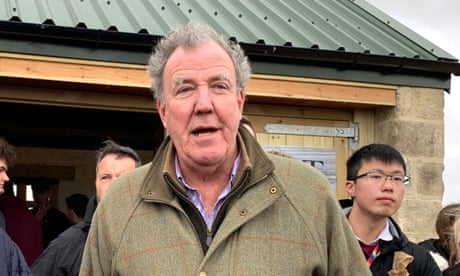 Jeremy Clarkson has said people in the UK “do not pay enough for their food” and that prices should be double what they are.

The 62-year-old presenter, who bought an Oxfordshire farm in 2008, made the comments as he spoke about the difficulties in producing food.

The broadcaster’s efforts running his farm have been documented for an Amazon Prime series, Clarkson’s Farm, which has won plaudits for its cinematography. It documents the farm’s staff telling Clarkson when he is being useless and charts the difficulties faced by workers during the Covid-19 pandemic.

The success of the series has encouraged visitors flock to Clarkson’s Diddly Squat farm shop to buy products such as “Cow Juice”, rapeseed oil, chutneys and jams.

In an interview with the News Agents podcast, Clarkson told the presenters Emily Maitlis and Jon Sopel about his efforts to get pigs to mate.

“It’s soul-destroying, the amount of work,” he said. “I was out last week in sideways rain, really heavy, hard rain, trying to get a pig’s penis into the back of another pig, while Lisa, my girlfriend, was trying to give another sow the impression she was being mated by rubbing her back.

“And then someone’s going to go: ‘How much for your bacon? Why are you charging so much?’ Because it costs a fortune to do it.”

He told the presenters that working on a farm and looking after pigs was “really hard work”. He said: “Lisa and I had to build all their [the pigs’] pens, so you’re out at night, because it gets dark so early, hammering fenceposts and then stretching the barbed wire along and fixing the electric fences, so that somebody can stand in Tesco and go: ‘Have you seen the price of these pork chops?’ Yes, and they should be more, they should be double what they are.”

Clarkson added: “People simply don’t pay enough for their food. The one thing a government will never say: ‘Oh you’ve got to pay more for your food.’ You don’t pay enough.”

Maitlis, who joined the BBC in 2001 and presented Newsnight from 2006 until earlier this year, said: “So Jeremy Clarkson says prices should go up?”

Clarkson replied: “Yeah, they should. They should be double what they are, you know, to get out and do that sort of work.”

He said the countryside looks “beautiful” because of farmers. “If I didn’t do anything, it would be a gigantic 1,000-acre bramble bush,” he added.

He said he was “acutely conscious” that raising interest rates was adding to the hardship faced by millions of households and businesses amid the cost of living crisis.

Clarkson’s full interview on the News Agents podcast is available on Global Player.