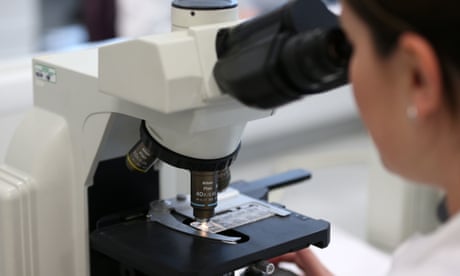 Scientists hope to double the survival rate of people with advanced cancer within a decade by using new lines of attack to fight the disease.

Speaking at the launch of a joint five-year research strategy by the Institute of Cancer Research (ICR) and the Royal Marsden NHS foundation trust in London, experts described how targeting non-cancerous cells within tumours could open up new frontiers in the fight against the disease, enabling more people to be cured and others to survive for far longer.

Although cancer is initially driven by mutations that cause cells to start growing and dividing abnormally, a tumour’s environment affects how it grows and spreads. “We increasingly see the disease as a complex ecosystem, in which cancer cells evolve amid a mesh of cells and signals from surrounding tissue and the immune system,” said the ICR’s chief executive, Prof Kristian Helin. “We have identified cancer’s evolution within [this] ecosystem as a major challenge and opportunity for the next five years.”

One strategy they plan to deploy is breaking the ability of cancer cells to instruct other cells to come to support them. For instance, cancer cells sometimes send signals to the bone marrow, instructing “slave cells” to create “nests” in other parts of the body where cancer cells could migrate to and set up secondary tumours. Interrupting these systems would help stop cancer spreading.

Experts are also learning how they might use drugs that talk to the immune system, increasing its ability to recognise and destroy cancer cells and blunting the activities of immune cells that are co-opted into helping to protect the cancer cells.

“We are aiming to tilt the balance in favour of the immune system and make the environment inhospitable to cancer cells and favourable for elements of the immune system that can attack them, so that we can make the disease extinct within the body,” said Kevin Harrington, professor of biological cancer therapeutics at the ICR and consultant at the Royal Marsden.

Another avenue is using genetically modified viruses to “target cancer cells and also to talk to the microenvironment, the ecosystem in which cancer finds itself, in order to drive a signal to reject the cancer and to kill those cancer cells,” Prof Harrington said.

Scientists will also expand research underpinning the development of “liquid biopsies” to identify the disease in its earliest stages. Tumours often shed microscopic fragments of genetic material into the bloodstream, which could be detected and used to help inform treatment. Already, such blood tests are being used to personalise cancer treatment and identify recurrence earlier.

Dr Naureen Starling, a consultant medical oncologist at the Royal Marsden, said: “We believe this technology also has the potential to transform cancer diagnosis, particularly for traditionally hard-to-detect tumour types like pancreatic [cancer], so could lead to rapid improvements in patient outcomes.”

Researchers also plan to use artificial intelligence to design new ways to combine drugs or adjust their dosing – with the aim of stalling cancer’s evolution within its ecosystem and increasing the length of time that people can survive with advanced cancer.

Dr Olivia Rossanese, director of cancer drug discovery at the ICR, said: “We plan to open up completely new lines of attack against cancer, so we can overcome cancer’s deadly ability to evolve and become resistant to treatment.

“We want to discover better targets within tumours and the wider ecosystem that we can attack with drugs. We’re finding powerful new ways to eradicate cancer proteins completely and discovering smarter combination treatments that attack cancer on multiple fronts.