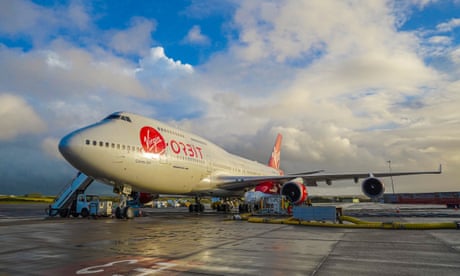 Spaceport Cornwall has been awarded an operating licence, enabling it to host the UK’s first space launch.

The Civil Aviation Authority (CAA) announced that the site in Newquay can be used for sending satellites into space.

The first mission is expected to be conducted by entrepreneur Sir Richard Branson’s Virgin Orbit company in the coming weeks.

Their mission has been given the title Start Me Up in tribute to British rock band the Rolling Stones.

The 747 will take off horizontally while carrying the rocket, before releasing it at 35,000ft over the Atlantic Ocean to the south of Ireland. The plane will return to the spaceport, while the rocket will ignite its engine and take multiple small satellites into orbit with a variety of civil and defence applications.

They will be the first satellites launched into space from Europe.
Previously, satellites produced in the UK have needed to be sent to foreign spaceports to get them into space.

Richard Moriarty, the chief executive of the Civil Aviation Authority, said: “This is an historic moment as we license the first ever spaceport in the UK. We’re proud to be playing our part in facilitating the UK’s space ambitions through assessing the safety, security and other requirements of these activities.

“This is another major milestone to enable this country to become a leading launch nation.”

The transport secretary, Mark Harper, who was required to give consent to the regulator to issue the licence, said the “cosmic cornerstone is being laid for the UK’s first orbital space launch”.

He added: “Virgin Orbit’s planned launch reinforces our position as a leading space nation as we look to the future of spaceflight, which can spur growth and innovation across the sector, as well as creating thousands of jobs and apprenticeships.”

Melissa Thorpe, the head of Spaceport Cornwall, said it was “ready to open up the use of space for good”.

Dan Hart, the chief executive of Virgin Orbit, said the licence was a “key preparatory milestone” and Virgin hoped to launch its first rocket from the site “in the coming weeks”.

Spaceport Cornwall is one of seven spaceports being developed across Britain. The first vertical space launch is expected to take place next year from the planned SaxaVord Spaceport on Unst in Shetland.

The locations for four other proposed spaceports in Scotland are: the A’ Mhòine peninsula in Sutherland; Prestwick in South Ayrshire; Campbeltown in Argyll and Bute; and North Uist in the Outer Hebrides.

Another spaceport has been planned at Llanbedr, Gwynedd, in North Wales.

The government hopes commercial space launches will be worth £3.8bn to the UK economy over the next decade.