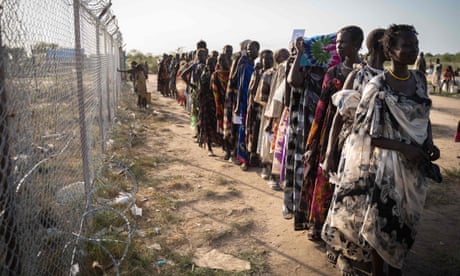 Starvation is being used as a weapon of war by South Sudan government forces against their own citizens, an investigation has found.

Deliberate starvation tactics used by government forces and allied militia, and by opposition forces, are driving civilians out of their homes, exacerbating Africa’s largest refugee crisis, according to the report published on Thursday.

All parties to the conflict have committed widespread human rights abuses and violations of international humanitarian law, said the report by law firm Global Rights Compliance.

The report is the first to call on the international community to intervene by demanding that starvation crimes in South Sudan are recognised as violating international law, and that perpetrators of war crimes are brought to justice.

Starvation tactics include the large-scale and systematic burning and razing of homes and property; destruction of food crops and markets; and targeted attacks on humanitarian aid workers. The devastation has forced hundreds of thousands of civilians to flee, mainly to refugee camps in northern Uganda.

Alex de Waal, executive director of the World Peace Foundation at Tufts University and an expert on the Horn of Africa, said starvation crimes perpetrated by South Sudanese government forces are well documented. Recently, the UN high commissioner for human rights and researchers have been recording crimes and seeking accountability, he said.

“There’s a real hope that there may be a first-ever prosecution in either the South Sudan hybrid tribunal or an international court for the war crime of starvation, bringing a South Sudanese culprit to the dock,” said De Waal.

The creation of a hybrid court was announced by the South Sudanese government in January 2021, but it is not yet in operation.

South Sudan gained independence in 2011, but entered a protracted and bloody civil war in 2013. The UN has documented horrific cases of mass rape sexual slavery and executions. There continues to be outbreaks of conflict.

The country has also experienced severe flooding and drought.

According to the UN, the threat to human life and the risk of famine has never been higher. Nearly 8 million people are believed to be facing acute food insecurity.

“We are really disturbed by soldiers, the very people who should protect civilians,” one woman told researchers. “We have seen an increase of cases of looting, even when people are raped, they are also robbed of money and food. We understand the soldiers are looting because they have not been paid for months. What does the government expect if they give their unpaid servants guns?”

Yasmin Sooka, chair of the UN Commission on Human Rights in South Sudan, said: “The people we meet tell us repeatedly that the only way the killings, rape and sexual violence, looting and pillage will stop is if those responsible for the violations are held criminally accountable. Impunity for these serious violations since 2013 has got us to this desperate point, where most South Sudanese are unable to feed themselves and rely mainly on humanitarian assistance.”

South Sudan is the deadliest place for humanitarian aid workers. Since 2013, 130 individuals have been killed while delivering aid and services, the vast majority of them South Sudanese nationals, according to the UN.

Médecins Sans Frontières and the World Food Programme were forced to suspend the supply of food, healthcare and drinking water to civilians after their workers suffered violent attacks.