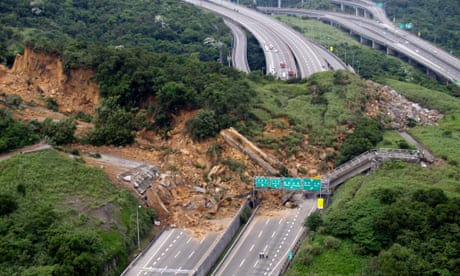 Can a change in the weather trigger a landslide? Sometimes, yes, according to research.

Most landslides are set in motion by an earthquake or torrential rain, but some have no obvious trigger. In 2009, scientists were stunned to discover that the stop-start Slumgullion landslide in the Rocky Mountains – which has been inching down the hillside for 700 years – is triggered by changes in atmospheric pressure.

So is Slumgullion a rare exception? To find out, scientists fed weather and landslide data from Taiwan – whose typhoons and steep hills create a perfect natural landslide laboratory – into a landslide model. Their results, which are published in Natural Hazards and Earth System Sciences, demonstrate that when the eye of a storm passes over a hillside, the change in atmospheric pressure can provide the final push, but its ability to do this depends upon the weather over the preceding months.

Heavy rain after a long dry spell pushes the water table up rapidly and triggers an instant landslide. By contrast, heavy rain on to already saturated soil doesn’t cause enough change in pore pressure to start the slide, but a subsequent change in atmospheric pressure can set soils in motion. This helps to explain why some landslides don’t occur until hours or even days after the rain has passed.