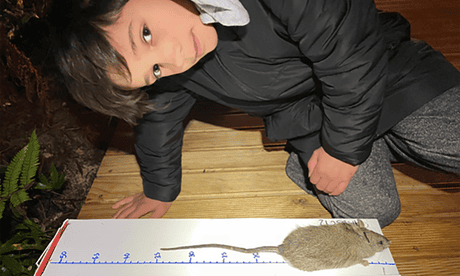 In a tiny school on the southern-most tip of New Zealand, the children are lining up their kill.

Big brown rats with long tails, their stomaches caked in blood. Smaller rats, stiff from the refrigerator, tails in a tangle.

The children happily pass the rodents around with bare hands, proud of last night’s catch – and fixed on the goal of eradicating rodents from the surrounding forests.

This small island school at Halfmoon Bay on Rakiura/Stewart Island recently unleashed its students upon the local rodent population, running a competition encouraging children to catch and kill hundreds of rats in an effort to preserve the island’s birdlife.

40 students caught more than 600 rats over the 100-day challenge. One five-year-old managed to catch and kill 60 rats over the course of the three months.

In TVNZ footage, captured in the midst of the competition, the children dump out bucketloads of rats on the school lawn, arrange them according to size, and dangle particularly impressive specimens by the tails for measuring. Each child was given their own trap, made out of recycled political billboards.

“My trap, basically the whole thing’s a layer of blood,” grins one enthusiastic vermin-slayer.

“Even the five-year-olds are really into the idea. They know the end goal: they want kiwis back in their back yards,” said Emma Jenkinson, chair of the school’s board of trustees, who helped organise the competition. The children’s efforts are part of one of the world’s most ambitious pest-eradication efforts; New Zealand’s national goal of being predator-free by 2050.

The children say they’re dedicated to trying to rid the islands of rats so that native birds can thrive. “We went for a walk once and saw more rats than birds, just in trees, going up trees to probably get to birds nests and eat their eggs and stuff,” said Bella McRitchie-King, the competition’s ultimate winner.

Rats are considered a dangerous pest in New Zealand, and a major threat to native wildlife. Because most of New Zealand’s birds evolved without mammalian predators, they tend to be highly vulnerable to rats, stoats, cats and other mammals introduced by human arrivals.

Many lay their eggs on the ground where they’re vulnerable to being eaten, and some, like the flightless kiwi, are easy prey for ground-based hunters. The country is now on a mission to eradicate uncontrolled predators, to enable those bird species to recover. Much of that work has been concentrated on Aotearoa’s small islands, where the sea border bolsters their chances of eradicating predators completely.

With their dead vermin, the children competed for a series of prizes, including for most rats caught – awarded to 11-year-old Bella who caught 64. The school also gave out awards for most aesthetically pleasing rat fur coat (a rich black colour), the rat with the strangest tail, biggest teeth and largest rat – an impressive 45 centimetres long.

Jenkinson said the children were already highly involved in conservation activities, so were not squeamish about their rat-trapping endeavours. “It’s no biggie for them to be doing rat trapping. But to have prizes on offer really boosted the stakes.”

“For some of the big catchers, it was a case of trapping on demand,” said Jenkinson. “They were trapping at neighbours houses, in their sheds, in their back yards.”