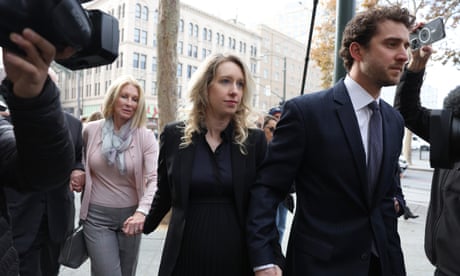 Elizabeth Holmes, founder of Theranos, has been sentenced to more than 11 years in prison over her role in the blood testing firm that collapsed after its technology was revealed to be largely fraudulent.

Holmes was convicted in January on four counts of defrauding investors. She appeared on Friday afternoon at the San Jose, California, courthouse where her nearly four-month-long trial began in August 2021, alongside relatives and supporters, including her partner, Billy Evans.

The sentencing marked a dramatic end to the years-long saga of the blood testing firm, which Holmes founded after dropping out of Stanford at 19 years old. Promising a revolutionary technology that could run hundreds of health tests on just a drop of blood, Theranos attracted big-name backers such as the former secretary of state Henry Kissinger and the former defense secretary James Mattis, who testified against her in the trial.

It was once valued at more than $9bn, but it imploded after reporting in the Wall Street Journal in 2015 revealed shortcomings and inaccuracies in its core technology. Theranos dissolved in 2018 and Holmes was charged with 12 counts of fraud, alongside her co-executive and former romantic partner, Sunny Balwani, who was convicted on 12 counts in his own trial.

Prior to her sentencing, Holmes was given a last opportunity to speak to the court. Through tears, she expressed regret for letting down “the people who believed in us”.

“I am devastated by my failings,” she said. “Every day for the past years I have felt deep pain for what people went through because I failed them. I regret my failings with every cell of my body.”

In a statement preceding the sentencing, the federal judge Edward Davila painted a picture of Silicon Valley as being a formerly rural agricultural center to that became “the crucible for innovation around the world”. He said its legacy dependsed on the ability of investors to make decisions “free from lies and misrepresentation”.

“This is a fraud case where an exciting venture went forward with great expectations and hope, only to be dashed by misrepresentation, hubris, and plain lies,” he said.

Davila said the court had calculated the total loss as $384m in investments and a $121m loss in share value that can be attributed directly to Holmes’s fraud. He also found that Holmes, through Theranos, had defrauded more than 10 investors – listing big name victims such as the media mogul Rupert Murdoch and the family of the former government official and investor Betsy DeVos.

Also among those investors was the former US secretary of state George Shultz, whose son Alex Shultz gave a victim’s statement regarding the impact of Theranos on his family. Alex’s own son Tyler worked at Theranos before revealing the shortcomings unfolding inside the company.

Alex Shultz said the saga had torn his family apart, and that Tyler had lived in fear after Holmes hired private investigators to track him due to his whistleblowing. “My son slept with a knife under his pillow every night thinking someone would come and murder him,” Alex Shultz said. “My family home was desecrated by Elizabeth.”

Davila ordered three years of supervised release once Holmes is out of prison. He will set a hearing date to determine the amount of restitution she must pay. Holmes has been ordered to surrender herself into custody in April, although her lawyers are expected to ask that she remain free and on bail while she appeals the sentence.

Federal prosecutors had suggested the judge sentence Holmes to 15 years in prison and require her to pay $800m in restitution, while her lawyers requested a sentence of no more than 18 months to be served on house arrest.

More than 130 people submitted letters of support for Holmes ahead of the hearing, including Evans and Senator Cory Booker. “I firmly believe in the possibility of rehabilitation and in the power of redemption for anyone,” Booker wrote of Holmes, whom he said he considered a friend.

Throughout the trial, Holmes’s lawyers cast her as an ambitious but misguided young founder who was unaware of the extent to which Theranos’s technology was malfunctioning. In a letter to judges filed last week, they argued sending Holmes to prison was unnecessary.

“Ms Holmes is no danger to the public,” Holmes’s lawyers said in the court documents. “She has no criminal history, has a perfect pre-trial services compliance record and is described by the people who know her repeatedly as a gentle and loving person who tries to do the right thing.”

Her legal team has also argued Holmes was the victim of abuse at the hands of Balwani, who they say influenced her decisions at the company that led to its collapse. Balwani, who has denied these claims, is due to be sentenced in December.

A harsh lesson for tech founders

The downfall of Holmes continues to cast a long shadow over Silicon Valley. The story has spawned numerous articles, podcasts and an Emmy-award winning TV series, and is seen as an indictment of Silicon Valley’s “fake it ’til you make it” culture, which encourages founders to make big promises to secure investments.

Throughout the trial, Holmes attorneys attempted to paint her as an ambitious founder who overpromised on a company she believed in – a justification Davila soundly rejected. “Failure is normal,” he said. “But failure by fraud is not OK.”

The harsh ruling – which aligned with federal sentencing guidelines but was far more severe than the 18 months of house arrest requested by Holmes – sends a strong message from the US government to Silicon Valley, said Anat Alon-Beck, a law professor at Case Western Reserve University in Ohio.

“There is a new sheriff in town – this is going to change things for both founders and investors,” she said. “People are going to be more careful.”

Her sentencing could lead founders in the future to be more careful about what they advertise of companies in the future, said Neama Rahmani, president of West Coast Trial Lawyers and a former federal prosecutor.

“This is a very high profile case, and investors in Silicon Valley are paying attention,” Rahmani said. “Going forward, founders are going to be much more careful about what they say in the startup phase, because this has shown the government will hold you accountable.”