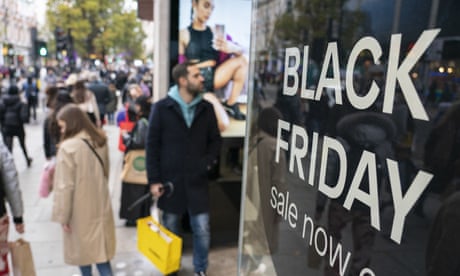 Black Friday got off to a muted start in the UK, with the number of home deliveries booked down by about 5% and no surge on the high street.

On Friday morning, the number of transactions handled by Barclaycard Payments, which processes £1 in every £3 spent in the UK, was steady on the same period on the morning of Black Friday a year before.

Meanwhile, demand for deliveries was down 5% on what is traditionally one of the busiest shopping days of the year, according to the delivery technology group Metapack.

The number of shoppers out and about was up 5% on last year, according to the analysis firm Springboard, but that was far less than hoped as shops are bouncing back from the pandemic lockdowns and last year’s fear of the Omicron variant that hit high streets and shopping centres.

The number of shoppers was still well below pre-pandemic levels – 15% on average below 2019 and just over 30% down in central London.

Diane Wehrle, the insights director at Springboard, said the shopper numbers were “encouraging – not off the scale but not a disaster either”.

She said shoppers were being more cautious about their spending and so more likely to want to pick something up in person – suggesting overall trade could be worse than the footfall figures suggest. She said: “It’s difficult trading conditions for retailers and it is going to be a tough Christmas.”

Marc Pettican, the head of Barclaycard Payments, said: “Our data shows that Black Friday is off to a steady start this year, despite the challenging economic backdrop.”

Analysts suggested spending in the US-inspired discount event had been spread further across the week as households prepared for the World Cup games for Wales and England today.

Barclaycard said the volume of transactions rose 3.5% in the week ahead of Black Friday compared with the week before

Pettican said: “It’s likely the feelgood factor in the run-up to the World Cup, with the England and Wales matches on Monday of this week, has given retail and hospitality a boost. We’re also seeing Black Friday discounts starting earlier each year, so while today remains the main event, many retailers started their deals earlier in the month.”

The picture remained unclear on Friday morning with Nationwide building society said that its customers had made 7% more purchases than on Black Friday 2021 and a third more than in 2020 when the pandemic subdued spending.

Mark Nalder, the director of payment strategy at Nationwide, said: “Early indications are that this Black Friday will be the busiest shopping day of the year. Despite cost of living pressures, transactions are already up 7% on last year. The lure of a Black Friday bargain ahead of Christmas is clear to see.”

Analysts suggested that the Wales and England World Cup matches on Friday might dampen spending as will fears about deliveries as a result of the Royal Mail strikes this week and next.

Forecasters are divided on how the Black Friday period will play out given many uncertainties including the amount of spare cash for households dealing with rising energy costs offset by mild weather in many parts of the country.

The volume of items bought is expected to be down . Analysts at GlobalData for Vouchercodes estimate Britons will increase spending by 2.1% to £22.62bn over the two-week Black Friday period, which runs from 22 November until 5 December, way behind the level of inflation.

The CEBR thinktank has warned of a “bleak Friday” as the cost of living crisis, combined with warnings that discounts are often more generous at other times of year and the threat of a Royal Mail strike, hits trade.

It said: “This year, people simply have less disposable income to spend at all, with surveys showing many households are cutting back on spending.”

Retailers are thought to be weighed down with stock as spending on “big ticket” items such as furniture has slowed dramatically amid uncertainty about the economy while fashion retailers have seen low demand for winter coats and knitwear amid a mild start autumn.

Tom Forbes at Metapack said: “We expect that Black Friday discounting will go deep into December as retailers continue to shift excess stock and as consumers look to spread the cost of their Christmas spending over a few weeks, rather than just over a couple of days.”