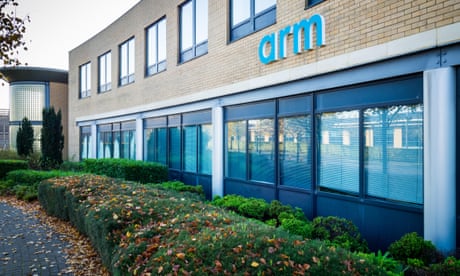 Much-anticipated plans to list the British chip designer Arm on the stock exchange have been delayed by managers who fear the global economic downturn and a slump in tech shares could spook potential investors.

The Cambridge-based company wrote to private shareholders a few days ago, saying the initial public offering (IPO), which could value the company at up to $40bn (£34bn), would not take place until well into next year. The company was widely expected to float as soon as the first quarter of next year.

The delay will raise anxiety among UK ministers, who have lobbied the company to list on the London Stock Exchange to help secure the City’s reputation as a potential destination for high-profile tech IPOs over rivals including New York.

“Clearly, we want to float as soon as is possible. But given the current global economic uncertainty, given the state of financial markets, that’s probably now unlikely to happen before the end of March 2023,” Ian Thornton, Arm’s head of investor relations, told investors, the Mail on Sunday reported.

“However, preparations for the flotation are going very well. They’re advanced. And we are fully committed to floating sometime in 2023,” he added. A spokesperson for Arm confirmed the delay.

Analysts have previously estimated that Arm – whose chip designs are used by more than 500 clients including Apple, Samsung and Google in products ranging from iPads and mobile phones to cars and smart TVs – could be worth up to $40bn when it goes public.

But shares in big tech companies including the Facebook owner Meta, Google’s parent company Alphabet and Amazon have slumped this year, amid fears that surging inflation, rising interest rates and economic uncertainty would hit consumer demand and advertising revenues.

Those same conditions, sparked by Russia’s invasion of Ukraine and a subsequent rise in energy prices, have raised concerns about a global economic downturn. The Office for Budget Responsibility said last week that the UK had already fallen into a recession that would last more than a year and push half a million people out of work.

The delay to Arm’s IPO plans will put additional pressure on its owner, SoftBank, which bought the chip company for $32bn in 2016 but has suffered from a string of bad investments.

This summer, it emerged that Boris Johnson, then prime minister, joined lobbying efforts already under way by London Stock Exchange executives, government departments and senior officials to try to persuade Arm to float its shares in London.

Liz Truss attempted to revive those discussions before she resigned last month from her short-lived tenure as Johnson’s successor.