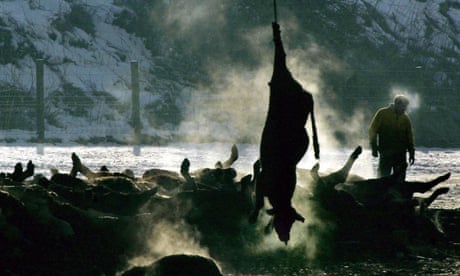 The UK’s main animal disease facility has been left to deteriorate to an “alarming extent” leaving the country vulnerable to major outbreaks on the scale of the devastating 2001 foot-and-mouth crisis, MPs have warned.

An inquiry by the Public Accounts Committee found that the Animal and Plant Health Agency (APHA) in Weybridge was “continually vulnerable to a major breakdown” because the Department for Environment, Food and Rural Affairs had “comprehensively failed” in its management of the site.

The committee identified more than 1,000 “single points of failure” at the national facility that would severely undermine its ability to take charge of the UK’s response in the event a major outbreak of animal disease. The centre would already struggle with anything more demanding than the current outbreak of bird flu, the report stated, adding that the UK faces real threats from bovine tuberculosis, African swine fever and rabies.

“After the 2001 disaster of foot-and-mouth disease, the past decades have brought one animal-sourced disease after another,” said Dame Meg Hillier, chair of the PAC. “It is shocking that government has allowed UK capacity in this area to deteriorate so alarmingly over that same period.”

After what the MPs call years of “inadequate management and underinvestment” at the site, Defra drew up a redevelopment programme expected to cost £2.8bn over 15 years. But with the programme not due for completion until 2036, officials are looking to manage the risk of a major incident that could cripple the facility through “patch and repair” efforts and better resources.

The last major incident at the site was in 2014, when backup generators failed, leading to a loss of power at some of the site’s high-containment buildings where animals are infected with viruses and bacteria. “This could have resulted in an escape of a pathogen,” the report found.

While the centre has drawn up contingency plans, a major incident at the site could severely hamper its ability to perform the crucial surveillance testing needed during a disease outbreak, for example, to track the spread of a disease from farm to farm.

“These diseases are devastating for our food production systems, the economy and, when they jump the species barrier to humans as Covid-19 did, to our whole society,” said Hillier. “Government must get a grip on this crucial and much delayed redevelopment programme. When it comes to the safety of our country we cannot afford more of the waste and delivery failures that continue to characterise far too many major projects.”

The MPs accuse government of failing to recognise the impact a major outbreak of animal disease would have. The UK’s national risk register ranks an outbreak of animal disease as a Category C event, implying an economic cost of £100m to £1bn. But the 2001 foot-and-mouth crisis would have cost the equivalent of £12bn today, the MPs note. The report calls on government to ensure the next update to the risk register “adequately reflects the seriousness of this threat”.

Paul Wigley, professor of animal microbial ecosystems at the University of Bristol, said the committee was right to highlight the long-term problems and urgent need for support at the site. “The potential of an outbreak is always around the next corner. Another outbreak of foot-and-mouth or the introduction of classical swine fever could lead to the collapse of major farming sectors in the UK,” he said.

Prof James Wood, head of veterinary medicine at the University of Cambridge and a member of the APHA science advisory board, said the steady deterioration of the facilities has been evident for years. “The laboratories at Weybridge are central to the UK’s ability to control an incursion of animal diseases and to its ability to detect any new emerging animal pathogen that might develop into a pandemic infection,” he said.

“We can no longer be reliant on laboratory resources from partner European laboratories. The significance of laboratories is demonstrated clearly by their central role in the diagnosis and control of the ongoing unprecedented avian influenza outbreak.”